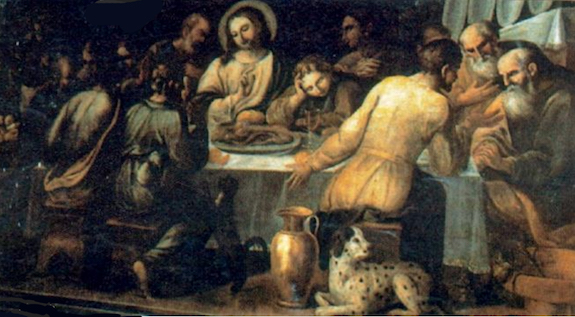 From the annals of “We don’t know if this is true, but here it is,” comes one theory for how the Dalmatian got its name.

The dalmatic is a long, wide-sleeved tunic most typically seen as a liturgical vestment in Lutheran, Anglican, Catholic, and United Methodist churches. A Roman variation of one of the most common garments, the tunica, or shirt, the dalmatic became one of the most common garments of the Byzantine Empire following after the collapse of the Roman Empire. 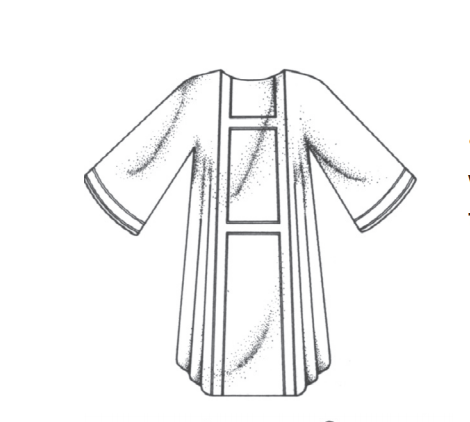 The word, “dalmatic” comes from the the Latin, “dalmatica vestis (Dalmatian garment) because these garments were originally made of Dalmatian fiber made from the wool of sheep living in the mountains of Dalmatia. Interestingly, when the Romans took over the region in 10 AD, they named it after some of its inhabitants, the Dalmatae. Before the Roman’s conquest, the Dalmatae were part of the Illyrian Kingdom, and “Dalmatae” may derive from the Illyrian word “delme,” meaning sheep.

Getting back to the point, there is a theory mentioned in an article by the fabulous dog writer, Ria Hör, that the name of the breed may have derived from that liturgical tunic, the dalmatic, or dalmatica. She, the Croatian Kennel Club, and the FCI breed standard note that in the painting, “Madonna with Jesus and Angels,” found on the altar in the church “Gospa od andjela” (Croatian for “Our Lady of Angels) in the town Veli Losinj in Croatia, a Dalmatian can be spotted. Hör points out that it’s possible one is the source of the name for the other.

The dog’s presence in the painting further underscores the Dalmatian’s origins as being from the historic province, Dalmatia, the more common theory of how the breed got its name. After all, the first descriptions of the Dalmatian were found in the chronicles of a church in the Croatian diocese, Djakovo, written by Bishop Petar Bakic in 1719, and in the church chronicles of Andreas Keczkemety from the year 1737, both of whom referred to the dog in Latin as, “Canis Dalmaticus.”

Even earlier – around 1360 – a spotted dog appeared in a fresco in the Spanish Chapel of Santa Maria Novella in Florence, Italy. The Dominican order of friars who supported this church wore white habits with black over capes, and over time, the church came to be represented symbolically in the art of the day by a black and white dog, particularly during the time of the Inquisition. As it happened, when the Inquisition was established, it was the Dominicans who were entrusted with its execution. As the church became more powerful, dalmatics became fancier; some cassocks were lined with ermine,  a white fur with black flecks or spots through it. You can see the connection.

Ultimately, all explanations of the breed’s name may be correct since there is an evident connection between liturgical tunics, churches, and one of the four historical regions of Croatia.

It wasn’t until 1771, that the first reference to the dog as a “Dalmatian” came, and it was from the writings of the Welsh naturalist, Thomas Pennant who described the breed in his book, Synopsis of Quadrupeds. Cynologists and canine historians, however, have been curious about the origins of the breed’s name ever since.

One thought on “Dalmatic (note the dog)”