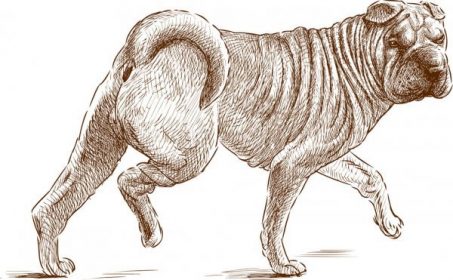 If the first thing we notice about a dog is his face and head, the next thing is probably his tail; it provides us a clue about the dog’s state of mind, and together with other body signals, helps us determine if the dog is friendly, or is one we should respect with distance.

Tails are important for several reasons, and there are many types of tails that do the job for the dog attached to them just as there are different breeds that wag them.  We find the Chinese Shar-Pei’s tail interesting for a few reasons.

The breed standard is clear that a high tail set is a desirable and important characteristic of the Shar-Pei, so much so that a low set tail is to be faulted (which, we suspect, would qualify the Shar-Pei in the sketch above).   Indeed, some would say that the higher the base of the tail is set on the croup, the better it is.  Not to be indelicate, but we’ve seen it written that the tail set should be high on the croup so that the anus faces the sky. This high set tail accounts for the breed’s singular silhouette, and according to Chinese maxims, the higher the tail is set, the braver the dog is, as well. 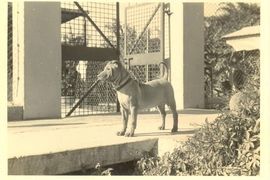 The standard also specifies that the tail should be thick and round at the base, taper to a fine point, and curl over or to either side of the back.  This last part is important because we’ve come across different carriages of the tail, none of which adhere to the breed standard calling for the tail to curl over the back or on either side of it. We share the names of these tail carriages anyway because they’ve evidently appeared throughout the breed’s history. We deduce this because of the Chinese custom of referring to the most commonly known similar shape or form to describe each part of a dog. As such, an old Chinese descriptive describing a tail like an iron wire can easily refer to the fish hook tail (also known as the fishing tail), the gun tail, “point to the water” tail, monkey tail, sickle tail and the iron tail, all tail carriages seen in the breed, albet not in a show ring. Some are of the opinion, too, that Han era canine statuettes seen at the Asian Art Museum in San Francisco, Avery Brundage Collection are Shar-Pei, and their tails appear to illustrate one of the aforementioned carriages. We also came across an image (seen at the right) of dog named “ChuChu,” said to be Matgo Law’s first Shar Pei. Note the tail.

From Westminster's Twitter feed: It’s time for the Westminster Kennel Club Dog Show at Paper Madison Square Garden!The images are courtesy of Paper Stadiums. They make models made almost completely out of paper, places such as Yankee, the Astrodome, Wrigley and Cleveland Muni. Check out their YouTube channel! youtube.com/c/PaperStadiums ...

Why cats and dogs may need their own COVID-19 vaccines

Eventually, pets may need their own COVID-19 vaccines to prevent the coronavirus from evolving further.
View on Facebook
· Share

It's a wonderful quote that we start with, and not surprisingly, Steinbeck lived with a Poodle who may have helped him form his opinion on the basis of that fact alone. ...

He Does Not Live by Tooth or Fang

“I’ve seen a look in a dog’s eyes, a quickly vanishing look of amazed contempt, and I am convinced that basically dogs think humans are nuts.” – John Steinbeck Not surprisingly, Steinbeck lived with a Poodle, and he may formed this opinion on the basis of that fact alone. Poodles, that bre...
View on Facebook
· Share