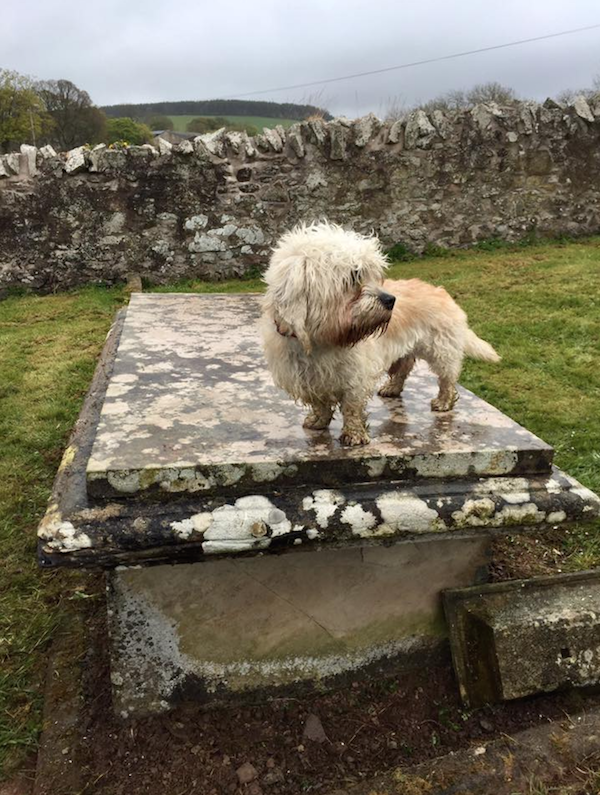 It’s bad form to stand on a gravestone, but somehow we think James Davidson wouldn’t mind these particular feet.

James Davidson was an avid fox-hunter and tenant of the hill-farm of Hindlee, a wild place in the Teviotdale mountains in the parish of Southdean. A terrier man, he used dogs from the Allan, Anderson and Faas families in his breeding program to develop a hunting terrier skilled at pursuing foxes, otters, badgers, and weasels.

Depending upon their color, every one of Davidson’s dogs was named either “Pepper” or “Mustard,” distinctions between the dogs being made by qualifying words such as “aul, “young,” or “little.”  The dogs remained largely unknown outside of the Borderlands until the publication of a book entitled, “Guy Mannering.” James was not only the basis for a character in the book, “Dandie Dinmont,” but he was the first person to document the breeding of the terrier that would take the name of the character based on him. In that regard,  Sir Walter Scott’s “Guy Mannering” may have been the first written record of a distinct terrier breed bred for appearances as well as purpose.

James Davidson died in 1820. Fifty nine years later, notable 19th century canine authority, John Henry Walsh, would give Davidson credit for being the father of the Dandie Dinmont in his book, “The dogs of Great Britain, America, and other countries.”  This photograph is of Davidson’s gravestone and comes to us via Sheridan Delaney via Karen Atkinson whose Dandie, “Rupert’ pays tribute.

2 thoughts on “A Dandie Tribute”