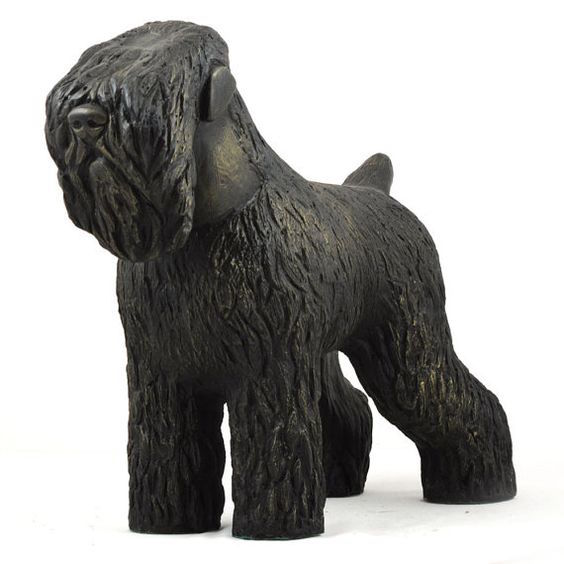 A few breeds with “terrier” in their name are either not true terriers, or aren’t part of the AKC’s terrier group.  The Yorkshire Terrier, for example, is a member of the toy group, while neither the Tibetan Terrier or Black Russian Terrier is a true terrier.

In the case of the “Blackie,” or Black Russian Terrier,  some 20 different breeds went into the development of the breed, including the now-extinct Moscow Water Dog, Caucasian Ovcharka, East European Shepherd, Great Dane, Russian-Europian and East-Siberian Laikas, German Shepherd Dog, and Newfoundland. We’ve come across speculation that the BRT is based on a foundation of 30% Giant Schnauzer, 30% Airedale Terrier and 30% Rottweiler, with the remaining 10% comprising the genetics of those other breeds. By the end of 1970s,  over 800 litters of the then-called Black Terriers had been bred – over 4,000 puppies conforming to the breed standard.  That the Soviet Army’s Red Star Kennel was able to get the BRT to breed true after only twenty of development using over 100 dogs from so many different breeds is somewhat astounding (to see some photos of these early dogs, visit here).

In 1992, the Black Terrier was renamed the Black Russian Terrier, and with AKC recognition, was placed in the Working Group (as opposed to the Terrier Group) by the AKC because its size and structure were inconsistent with the typical terrier type. What we’ve not been able to ascertain why “terrier” was ever a part of the breed’s name, or why it was retained.  Anyone?

4 thoughts on “The Black Terrier”