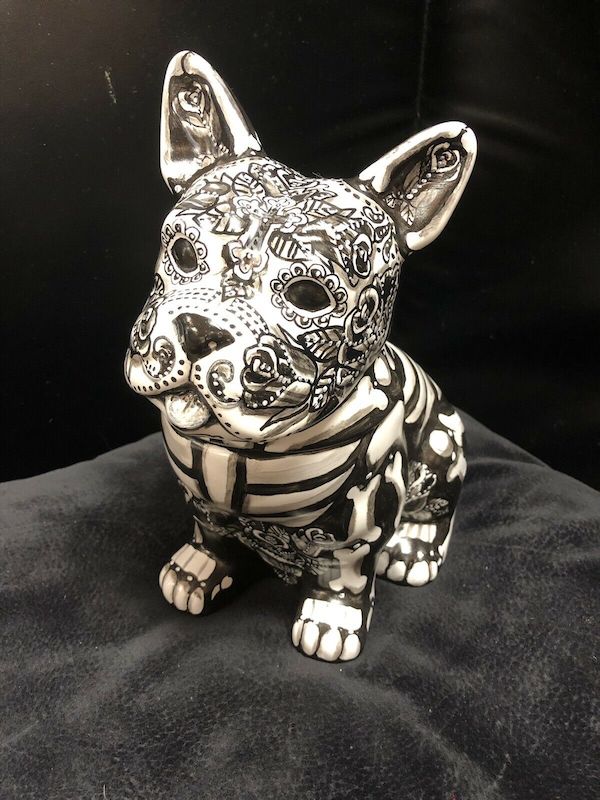 Day of the Dead (or Día de los Muertos) items like this French Bull Dog Sugar Skull Cookie Jar may look morbid, but when you understand the sentiment behind them, you’ll come to see that they are anything but ghoulish.

Celebrated from October 31 to November 2,  the public holiday that is observed throughout Mexico and other hispanic cultures is not a Mexican version of Halloween, but a life-affirming joyful time that remembers loved ones and friends who have passed away – and that includes pets.  It originated several thousand years ago with the Aztec, Toltec, and other Nahua people, who considered mourning the dead disrespectful because death was simply a natural phase in life. The dead are still members of the community to be kept alive in memory and spirit—and during Día de los Muertos, the gates of heaven open at midnight on October 31st, and  the spirits of all deceased angelitos (children) are allowed to reunite with their families for 24 hours. On November 2, the spirits of the adults come down to enjoy the festivities that are prepared for them.

Common symbols of the day are colorful calaveras (skulls) and calacas (skeletons) which are often made with chocolate or sugar, a tradition brought by 17th-century Italian missionaries. Celebrants often wear skull-like masks, and beautiful altars (ofrendas) are set up in homes and decorated with candles and flowers, along with mounds of fruit, peanuts, turkey mole, tortillas, bottles of soda, hot cocoa and water for the weary spirits. Included are decorations of Papel picado, or delicately perforated paper tissue paper that symbolize the fragility of life. Toys and candies are left for the angelitos.

On November 2nd, cigarettes and shots of mezcal are provided for the adult spirits, but also on November 2nd, festivities are taken to the cemetery because part of Dia de los Muertos is the cleaning and decorating the graves of loved ones. Adult graves are marked with orange marigolds, while white orchids are left at children’s graves.

Above all else, Día de los Muertos remembers not how the person died, but how they lived.

We wondered if remembering beloved pets was part of the original concept of Día de los Muertos, and just as we were about to conclude our research with little success of finding mention of dogs, we came across a site that states that alebrijes – spirit dogs – were believed to guide the ancestral spirits to their final resting place in the afterlife. Candles that represent fire are a light guiding them back to visit the land of the living, so yes, they are remembered. Many people have taken to creating a Dead Pet Altar with the same accouterments that humans get:  Photos of the pet, their favorite toy, leash, and, of course, their favorite treats and food.

We confess a weakness for the artistry and imagination of Día de los Muertos, and find it hard to resist Sugar Skulls. This year, we’re not even going to try. Do your own Google search for  “day of the dead items,” and see if you can resist what comes up.