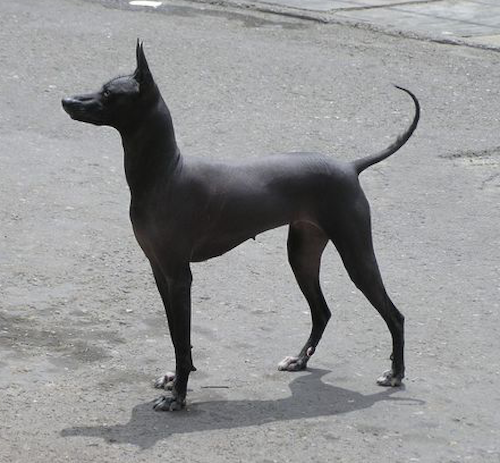 By all accounts, the Chancay, a pre-Columbian civilization living in the valleys on the central coast of Peru, were brilliant textile artisans. Their weavings, thousands of which survive to this day, attest to their technical mastery.

Ceramics were also very common in Chancay culture, items produced on a large scale using molds.  Both the textiles and ceramics featured geometric ornamentation, as well as portrayals of daily life. Miniature sized human-like figures called cuchimilcos were typically crafted with their arms extended as if they were inviting a hug. 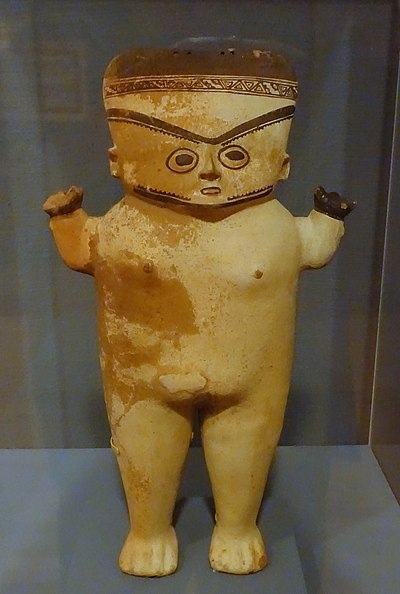 Our interest in the Chancay focuses on their depictions of dogs, and specifically, the Perro Calato, a hairless breed of dog we know today as the Peruvian Inca Orchid, Peru’s Only Internationally Registered Breed.  The Chancay not only incorporated the dogs’ images into their pottery, but wove the sweaters the dogs are shown wearing in that pottery. 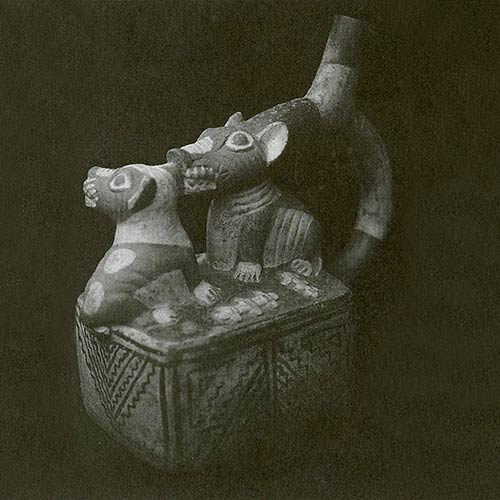 From the AKC with consent

The POI was a companion dog who not only lived with their owners in small homes, but also with powerful noblemen in their palaces. The remains of a PIO was found in the Lambayeqan tomb of the Lord of Sipan, a dog that archeologists believe was the Lord’s favorite pet. Sonia Guillen, a bioarchaeologist, also found that, “The dogs were buried in their own space. They were wrapped in textiles and they had a bit of fish put on top of the snout, as a way to send them to the other life with covering and food.” 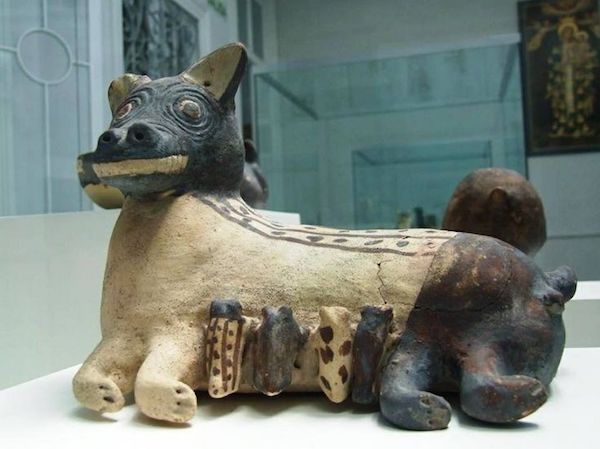 The Peruvian Inca Orchid was more than company, however, the dogs were believed to have curative powers. Their urine and feces were used in medicines, and to treat arthritis and respiratory conditions, they were pressed against the body as canine hot water bottles. They were also believed to cure asthma since they “don’t cause allergy and absorb lots of humidity.”   In particular, folklore held that a hug from a hairless dog could cure stomach pains. Whimsical conjecture: Maybe cuchimilcos were looking for a hug from a dog!

The breed’s reputation as a mystical power spread throughout the Empire, and indeed, we’ve seen hints that the dogs were “dressed in ceremonial clothing on spiritual occasions.” Along with Llamas, Perros Calatos became the Incas’ favorite companion.

After a difficult period following the Spanish invasion (which saw the breed used as a food source and as a source of amusement in dog fights), and a time of recovery, we fast forward to on June 12, 1995, the day the FCI recognized the breed and registered in its breed nomenclature with the number 310.3.  And since 2001, the PIO is considered a National Heritage through decree of law 27537. With Huaca Pucllana’s 1989 initiative, the government decided to safeguard the breed by ordering all archeological sites and museums along the coast to have at least a pair on site.

2 thoughts on “Hug a Hairless”