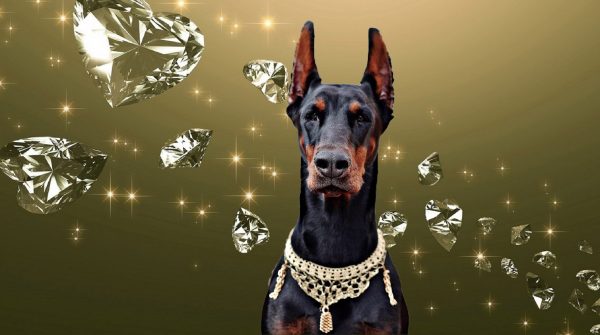 Scroll down to the video that will get you in the mood for this post, and we promise, we eventually make a dog connection. A tortured route, perhaps, but we get there.

When it comes to diamond producing countries, it might surprise you to learn that as of 2020, the leading producer wasn’t South Africa, but Russia. In terms of production, the next top producing country is Botswana followed by Canada, Angola, South Africa, the Democratic Republic of the Congo, Namibia, Lesotho, Australia and Tanzania.

Though it is in a humble tenth place, Tanzania became well known as the first significant diamond mine outside of South Africa, and it gets our interest because of the Williamson Mine, Tanzania’s only important producer. This mine is an open pit operation that mines the world’s largest deposits of Kimberlite, an igneous rock that can contain diamonds. This vein is so dense that at its deepest point, it’s only 393 feet deep, but nevertheless, it has been in continuous operation since 1940.

The Williamson Mine has an interesting background starting with its namesake, John Thornburn Williamson. A rugged Canadian geologist born to an Irish lumberjack, Williamson had worked for De Beers in 1932, but left the company to go prospecting for diamonds on his own in what is now Tanzania.

He was good at it.

John Williamson uncovered the largest diamond mine that had ever been found, one that was four times larger than any of the diamond pipes found in South Africa.

And it had to be a sweet feeling to know that only ten years earlier, prospectors from his old company, De Beers, had looked around the same spot and found nothing. De Beers shrugged it off because they now worried that Williamson would flood the market with his new diamonds, and that would impact De Beers.

They offered their old employee roughly $2.5 million for the mine.  And John did what anyone flat broke but with a dream would do.

He turned them down.

He’d been looking for diamonds for a decade, and he wasn’t about to sell out. He secured the backing of Indian businessmen, took on a multicultural workforce, and by 1946, he had 6,000 employees and their families working at the mine also known as the Mwadui mine. Under Williamson’s watch, innovations and improvements were made, including churches and schools for his employees.

John watched over the mine until he died in 1958 at the young age of 50.  He had never married, and upon his death, the mine was left to his three siblings who promptly sold the mine to a partnership between De Beers and the government of Tanzania. We’re not sure if the public swimming pool, tennis and squash courts, hospital, soccer field, athletics track, golf course and yacht club were added by John, De Beers, or the Tanzanian government, but our particular interest was piqued by learning that additions included dog kennels for the Doberman Pinschers “employed” to ambush bad guys intent on mischief; We should add that the Dobermans had company. Rhodesian Ridgebacks and Alsatians (German Shepherd Dogs) were also part of the canine crew.

Perhaps you’re thinking: OK, you made a connection to dogs via the Williamson Mine – but the Pink Panther????

Perhaps the most famous find from the Williamson Mine was the flawless pink diamond that came to be known as (wait for it)……….the Williamson Pink Diamond. Discovered in 1947, this was an extremely rare occurrence of a gem-quality pink diamond of any size. The one that was found weighed a whopping 54.5 carats. John gifted the rough diamond to Princess Elizabeth and Prince Philip upon their wedding, and they, in turn, had it cut by London diamond cutters, Briefel and Lemer a year later.  Cartier was commissioned to create a setting for the main 23.6 carats round brilliant cut diamond, and he added an additional 203 white diamonds—a mixture of brilliants, baguettes, and marquises.which you can see here.  There are scores of photographs of Queen Elizabeth wearing the broach, and in fact, the Queen was wearing it when she met Barack and Michelle Obama at Buckingham Palace in 2009. It was thought to be the second most valuable in the Queen’s collection, and it was certainly one of her favorites.  You might enjoy reading a bit more about it here.

So what about the Pink Panther????

By most accounts, the Williamson Pink Diamond was the inspiration for the Pink Panther diamond in the 1963 film, The Pink Panther.

We have to conclude with a hat tip to Bekki who found this rabbit hole for us to crawl into.