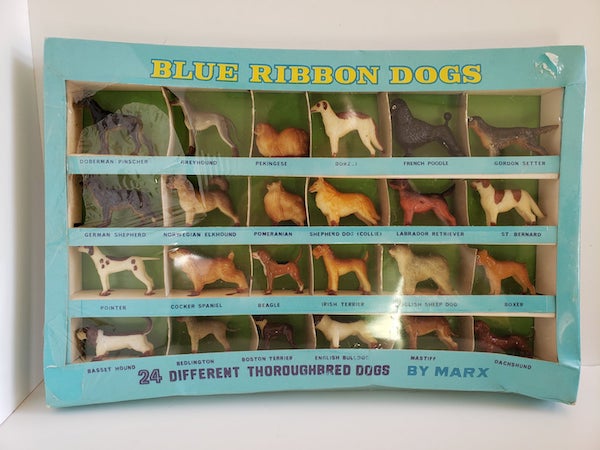 If you’re of a certain age, do you remember playing with these?

Even if you don’t,  the chances are pretty great that you’ve played with a Yo-Yo, and the same company manufactured both. In fact, it was the Louis Marx Company founded in New York City in 1919 that first introduced the world to the Yo-Yo in 1928.

Marx became a leader in the toy industry, and before Quaker Oats bought the company in 1972 (and it ceased operating in 1979),  Marx produced hard plastic, vinyl dolls, plastic dogs, and action figures, many of them imprinted with the slogan, “One of the many Marx toys, have you all of them? Made of a plastic so hard, the toys were often touted as being “ceramic-like,”

Still too old for you?

The Marx factory in a Lake Erie town also manufactured thousands upon thousands of Big Wheels in the 1970s, and if you didn’t drive one, then you had a neighbor whose kids did (making a cacophony unlike any other).  We’re so sure that you probably at least touched a Marx toy in your youth or as a parent that we think you’ll find it here.

There really was a Louis Marx. With his brother, David, the company’s basic aim was to “give the customer more toy for less money,” and stressed that “quality is not negotiable” – two values that made the company highly successful, and the brothers millionaires three years after founding the company. Louis Marx enjoyed his success by living in 20.5-acre, 25 room Georgian mansion in the wealthy suburb of Scarsdale, New York. After his death in 1982, the estate was sold to a developer to make way for 29 homes.

You can still find Marx dogs all over the Internet, including Ebay and Etsy.