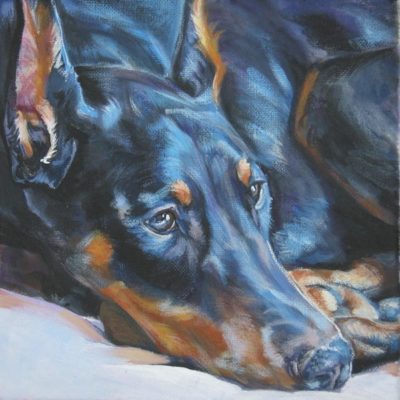 The fabulous Doberman Pinscher exists in five different colors: Black, red, blue, fawn (Isabella) and white, but the breed standards for the AKC, UKC and CKC (Canada) allow for four of them; the United Kennel Club goes farther by indicating that any color other than listed is a disqualification –  albinism, while the Doberman Pinscher Club of America notes that any other color is a disqualification for selection of breeding stock through the Championship point system. As for the FCI, its standard indicates that the Dobermann (note the tradition breed name spelling) is bred in two color varieties: Black or brown with rust red, clearly defined and clear markings (tan markings).

For the moment, we want to touch upon the so-called “blue Doberman” (sometimes called a gray Doberman). A Blue Doberman isn’t really blue, it’s more of a gray color that can appear to be blue, silver, or even purple, the unique coloring coming from a recessive color diluted gene that both parents must have in order to produce a “blue.” Put another way, when the recessive dilute gene is present, “black” Dobermans can produce blue puppies.  They are more rare than the average Doberman colors of black with rust markings or the red with rust markings, but not as rare as one might think.

While there is another dilute (fawn, a dilute of red) today we’re focusing on the blue, but both have a higher incidence of coat and skin problems. As the DPCA writes, “This arises from the way the Melanocytes are deposited on the hair shaft itself.  These are what “color” the hair shaft .   It is very irregular in pattern compared to the Blacks and Reds and the hair itself is softer and has a difficult time coming through the follicle and emerging through the skin.   There is a higher incidence of ingrown hairs and staph infections because of the nature of the hair shafts themselves.”

Some breeders have noted that thinning coats in blues typically appear between about 12 months and 3 years of age, and the earlier the problem shows up, the more severe the problem. The problem may be a skin condition known as Color Dilution Alopecia in which hair becomes brittle and breaks easily. This is also sometimes called “Blue Doberman Syndrome,” or Blue Balding Syndrome. Because this is a genetic issue, some breeders will typically discourage new owners from breeding their blue Dobie.  The dog looks fine and appears healthy and normal, and owners are encouraged to enjoy their dog, and love him or her, but continuing this gene through breeding may not be what a breeder wants to encourage. Ross Clark, DVM, opines that the frequency of the condition can be as high as 93% in blues and 75% in fawns.  Over time, an afflicted dog could lose a lot of hair over their body leaving exposed skin that might be scaly and lead to bacterial skin infections. A skin biopsy is in order to rule out other possible skin conditions, and a definitive diagnosis is made by microscopic evaluation of the hair which will probably be sent off to be reviewed by a dermatohistopathologist –  a specialist who studies cutaneous diseases at a microscopic level.  To our knowledge, there is no cure, but there are treatment options that include supplementation with products that aim to improve quality of life by improving the skin. According to Animal Dermatology Clinic, essential fatty acids and Vitamin A supplements may occasionally help. Owners are always urged to consult with their vet.

We mention all this as a “buyer beware” warning. A simple Internet search brings up results that reveal breeders who are selling “rare” blue or silver Doberman Pinscher puppies, and they’re charging top dollar (and in some cases, more) than what one would pay for a health-tested well bred dog of standard color.

Blue Dobermans deserve a wonderful life filled with love and a family that understands them, but potential owners should be educated about why a “Blue Doberman” is “blue,” and what that means.

Hovi owners, is the Hovawart a versatile breed? Can you share with us pictures and experiences of the things your dogs can do, from agility and obedience, to rally, therapy dog work and anything else? What training tips can you offer when working with this breed?