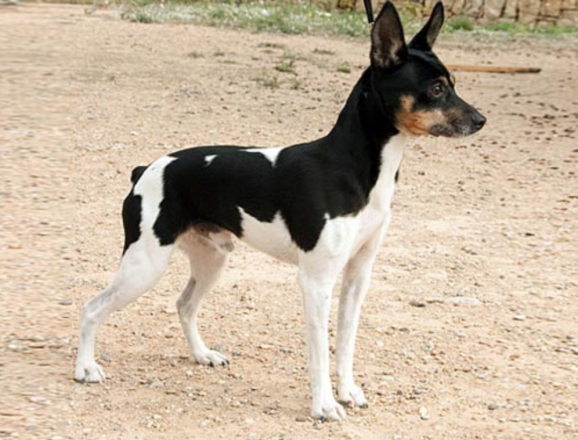 Our on-going series on Spain’s five native ratting breeds (the Valencian Ratter, Andalusian Ratter, Majorca Ratter, Murcian Ratter, and Basque Ratter) is beginning to feel like a travelogue of Spain, but that is the beauty of purebred dogs: Learning about the breed educates us about their home.

Of the five breeds, the Murcian Ratter may be the oldest. A local ratter has existed in the region of Murcia (now the seventh largest city in Spain) since the 16th or 17th century when it was known as the Perro de huerta, or “Huerta dog” (Huerta refering to the fertile cultivation area of the region). It descended from dogs brought to the area by ancient traders from Egypt, Carthage, and Rome (though one source says that it was Romans who introduced the breed, and they got the dogs from Egypt). Either way, the dogs bred with “local talent,” and in the 1900s, English Toy Terriers and Fox Terriers were introduced that intensified the fearlessness and prey drive of the breed.

A less “romantic” name for the breed is, nevertheless, an accurate one: Dog of Irrigation Ditches. The Murcian is relentless in its drive to rid the world of rats, and a favorite place for rats to nest and breed in Murcia was irrigation ditches.  Sadly, farming practices and techniques modernized leaving the Murcian Ratter without much of a job. The dogs were still put to good use in local factories and mills, and in 1935, Don Pedro Manzanera Cano started a breeding program in the neighborhood of San Jose.

In the mid 20th century, people realized that their little breed was in trouble, and in 1997, a breeding program was established to save the breed from extinction. By 2009,  the program had 80 breeding dogs and was on its third generation of Murcia ratters. A DNA testing program was added, and we are happy to report that the Murcia Ratter is now quite popular in Murcia as a companion pet.