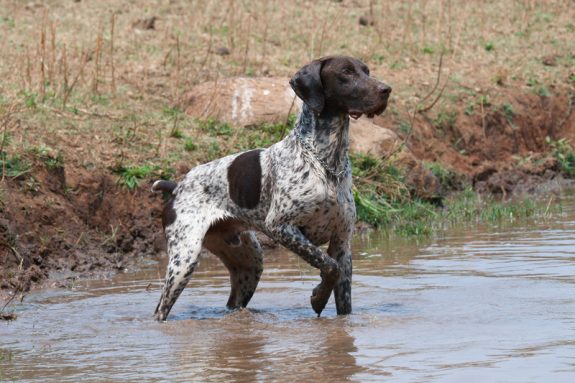 Our post title was originally “Roan,” however, the more we got into it, the more rabbit holes we went down. Ultimately, we added the “g” so the title would read “groan” simply because coat color genetics is a very big topic, and the subject of roan isn’t much smaller. We were groaning as we realized as much. Our discussion, then, is necessarily limited to the specific word, “roan” even as we know that it may be called something else in a different breed.

Roan is a coat color you’ll find in many animals, including cats, horses, cattle, and it is mentioned by name in the breed standards of several AKC breeds, all of them in the Sporting Group (or are breeds that will go into that group upon recognition). They are the Small Munsterlander, Cocker Spaniel, Lagotto Romagnolo, English Cocker Spaniel, Brittany, Wirehaired Pointing Griffon, Spinone Italiano, English Setter, English Springer Spaniel, and German Shorthaired Pointer.

Absent from the list is the Irish Red & White Setter in which the word does appear, but not in a desirable way. From the standard: “Roaning, flecking and mottling on any other part of the body is objectionable.” We surmise that the roan is an advantage in the field to a gun dog for whom camouflage is an asset, and for that reason, it’s mentioned by name in that breed’s standard. We further go on to guess that IRWS fanciers and hunters prefer that the glorious colors of the Irish Red and White Setter stay vivid because that, too, has its bonuses in the field.

Any discussion of color can get mired in the mud when four people in a row can perceive a color differently than the person next to them. Also, roan may be called something else in a different breed, i.e., mottled, ticked, or belton (a Spanish Pointer will be ticked, English Setters will be belted, while German Wirehaired Pointers will be roan – and in the Large Munsterlander, clear white-marked individuals may be called plated).  Roan and ticked coat patterns, then, are terms that we’ve noticed are often used interchangeably, in large part because some people believe that roan is the same as heavy ticking, while others think it’s controlled by a separate gene.

In 1957, Clarence Little (mercifully) suggested in his book, The Inheritance of Coat Color in Dogs, that the terms, roan and ticking, be used separately. Nevertheless, there’s still some ambiguity on how to use the term, and to add to the confusion, ticked dogs can also typically have roan areas. Indeed, some believe that the round spots on a Dalmatian are caused by the same gene that produces roaned areas on a German Shorthair Pointer, but with very different modifiers.

Roan is generally regarded as a dog having a base color (as in red, black, or brown) muted and lightened by a mixture of white hairs.  Some prefer to think of roan as an even mixture of white and pigmented hairs that are so closely spaced that the mixture appears to be giving the impression of a blue gray or iron gray color (for that reason, a dog with, say, a coat comprising black and white hairs is called a blue roan. Other roan types include red roan, lemon roan, liver roan and brown roan). Our favorite site on coat genetics writes that, “Roan is a pattern that produces heavily mottled white areas. Often only a small amount of scattered white is visible.”

Roan puppies are born with a white base coat. As the undercoat develops, the white becomes flecked with hairs with brown tips, and this will continue well into the dog’s first birthday.  Neither do hairs “gray out” or fade as a dog ages. Roan German Shorthaired Pointers, for example, have an even mixture of white and pigmented hairs that don’t become gray as the Pointer ages.

To our knowledge, the genetics behind roan dogs is still unclear beyond its dominance over white, or non-roan. It isn’t clear whether this is full dominance or incomplete dominance.