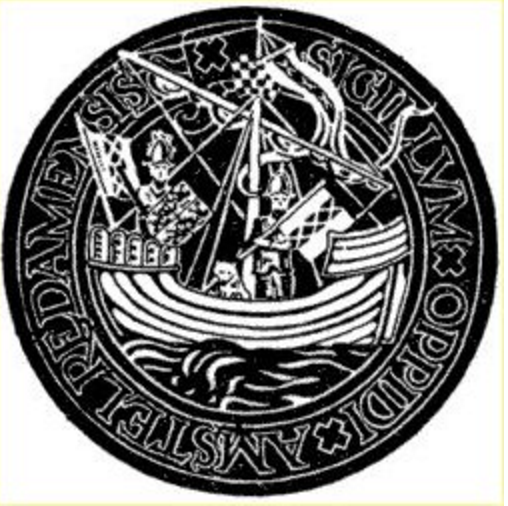 Eons ago, a Viking vessel ran aground off the coast of Friesland near Stavoren. All but the chieftain’s son drowned, the boy having been rescued by a fisherman named Wolfert, and his dog said to be a Keeshond.  The little group set sail on Wolfert’s fishing boat, but they, too, ran into trouble when a ferocious storm drove them into unchartered waters. Fortunately, they drifted up onto high ground saving their lives, and in gratitude for their safety,  Wolfert and the Norseman built a small chapel where the Amstel river flowed into the sea, and dedicated it to St. Olaf, the patron saint of mariners.  Eventually, a small fishing village grew up on the spot. Over time, storms deepened and widened the area that became the Auider Zee, and when a dam was erected across the river, the little town became known as Amstelerdam, later to be called Amsterdam. The legend remains, and to this day, it’s considered a good luck to have a dog on board a ship or boat.  The Great Seal of Amsterdam remembers the legend and includes a Spitz-like dog peering over the ship’s gunnels.

One thought on “The Dog on Amsterdam’s Great Seal”