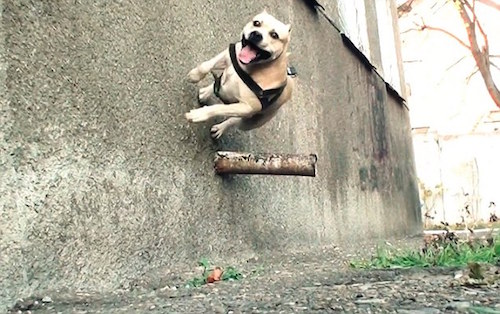 Strictly speaking, the sport of “parkour” is the act of moving from point “a” to point “b” using the obstacles in one’s path to increase efficiency. Think of the action movies you’ve seen in which a character is running through a city or park in a chase scene; he or she rolls over a picnic table, uses a trash can to boost themselves over a wall, then pushes off a fire hydrant for momentum to launch over a fence.  That is parkour. It had its origins in a training program for French Special Forces known as “Parcours du combattant”, or “The Path of the Warrior.”  Frenchman, David Belle, the son of a Parcours Warrior, was the “inventor” of Parkour as a sport that has since grown into worldwide movement.

But it’s not just for people.

Dog Parkour™ combines dog agility with parts of human parkour. Dogs learn to crawl, climb, jump, balance and go around various obstacles, and while it’s described as low impact, we suspect that has everything to do with the dog, the trainer, and the obstacles.

Any breed can do parkour, but we particularly like the juxtaposition of the American Staffordshire Bull Terrier’s breed standard that reads, “The American Staffordshire Terrier should give the impression of great strength for his size, a well put-together dog, muscular, but agile and graceful, keenly alive to his surroundings.” with the video of a “TreT,” a then five year old Am Staf from the Ukraine whose videos were hugely popular nine years ago. As we see it, TreT “backs up” what the breed standard describes: