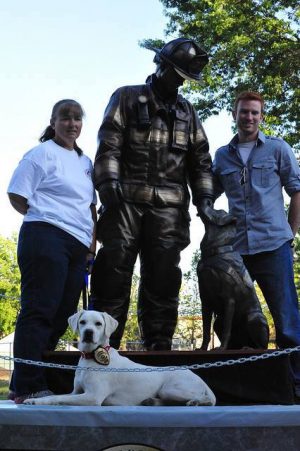 If you were a bad guy making a Molotov cocktail, you’d have to wash your hands at least 17 times before a dog wouldn’t be to smell traces of petroleum on your skin. Arson dogs – or accelerant detection canines – are trained to sniff out minute traces of accelerants like petroleum that are used to start a fire. Today there are over 350 arson dogs at work in 44 states, the District of Columbia and three Canadian Provinces, and each one has had to go through extensive training before becoming certified. Once certified, the dog works every day of the year, and s/he must be re-certified annually.

The Arson Dog Program was established in 1993 through the sponsorship of State Farm, and all the K-9s are Labrador Retrievers. Why? Not just because Labs have a superior ability to discriminate among scents that their noses can smell in parts per quintillion, but because they know how to work a crowd. Everyone loves a Labrador Retriever, and at a fire scene, the dog is encouraged to mingle with spectators and give them a good sniff. If the arsonist is in the crowd watching (and they often are), the ADC will alert to the smell of the accelerant on his or her clothes, shoes or body. Put another way: Busted.

The photograph seen here is of the bronze statue created to recognize the contributions of all arson dogs. It was designed by Austin Weishel, an artist and Colorado firefighter.

One thought on “The Favored Breed for Arson Dogs”