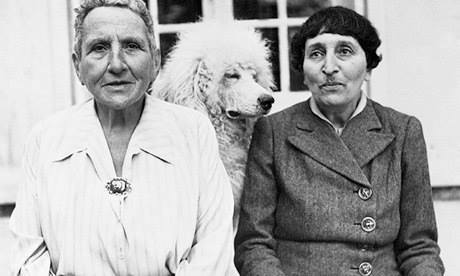 Gertrude Stein, and her partner, Alice B Toklas, were keen on white purebred Poodles, owning three in succession all named “Basket.”

“I am I because my little dog knows me, even if the little dog is a big one”

The first Poodle, a Standard, was bought at a dog show in Paris and named, “Basket” by Toklas who thought he was so fashionable, he should carry a basket of flowers in his mouth (he never did). Stein, completely smitten with the dog, insisted he be bathed in sulfur water each day.

“Basket I” died in 1937 and was followed by the second “Basket,” also a Standard white Poodle, this one playing muse to Stein. Toklas once noted:, “Basket, a large, unwieldy white poodle, still will get up on Gertrude’s lap and stay there. She says that listening to the rhythm of his water drinking made her recognize the difference between sentences and paragraphs, that paragraphs are emotional and sentences are not.”

Basket II was a pedigreed dog which was his good fortune during World War II when Nazis forbade the feeding of all pets except those with pedigrees. It’s not lost on us today that some anti “purebred” sentiment may stem from such hateful thinking, but as someone once said, “If you need a dog to make you feel better about yourself, you don’t need a dog, you need a therapist.

Stein and Toklas also had several Chihuahuas, “Pople” (who reported enjoyed smelling flowers), two Chis named, “Byron,” and Pépé. The dogs were greatly loved, but appeared in fewer photographs than the Poodles whose pictures were taken by Man Ray, LIFE Magazine, and Cecil Beaton.