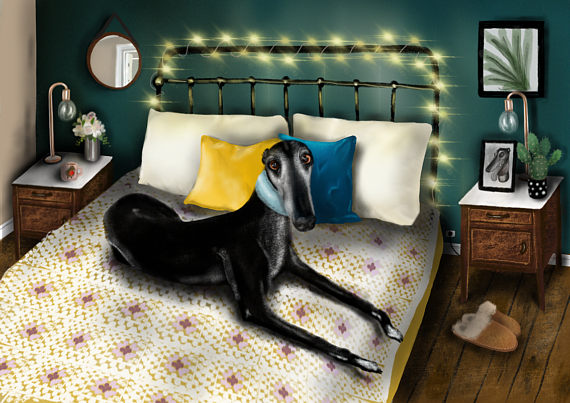 People who travel with their dogs are all too familiar with the extra charge of staying at a hotel with dogs, but it’s not an entirely new concept. Friedrich von Steuben was enraged when he was charged extra for his Greyhound’s room and board, though one of von Steuben’s associates mused that the innkeeper was probably justified since the dog ate as much as any of the soldiers billeting at the inn. The dog’s name was “Azar,” and the incident happened during the American Revolution when General von Steuben was training troops at Valley Forge during the endless winter of 1778-1779.

Von Steuben (and Azar) had traveled from Germany to fight in the Revolution, and George Washington’s first meeting with the eccentric man was memorable. The splendid sleigh in which Von Steuven and Azar rode was pulled by black Percheron draft horses, 24 jingling bells dangling and jangling. Von Steuben, himself, wore a silk robe trimmed with fur, and during the entire meeting with Washington, he petting Azor curled up on his lap (by some accounts, Azar was a “Miniature Greyhound,” perhaps an Italian Greyhound?) Following close behind the sleigh was Steuben’s French aide-de-camp, Louis de Pontière, and his teenage “secretary” Pierre-Étienne du Ponceau.

At the end of the war, von Steuben (and Azar) retired to a town near Utica, New York. Azor apparently was long-lived as evidenced by a letter written by von Steuven in 1786 in which he mentioned that he’d been ill and confined to his room with no company except for the dog. Steuben died in 1794, having been made an American citizen, and was buried on his farm near Rome, New York.

Image by Cherrish of artbycherrishlouise is available here