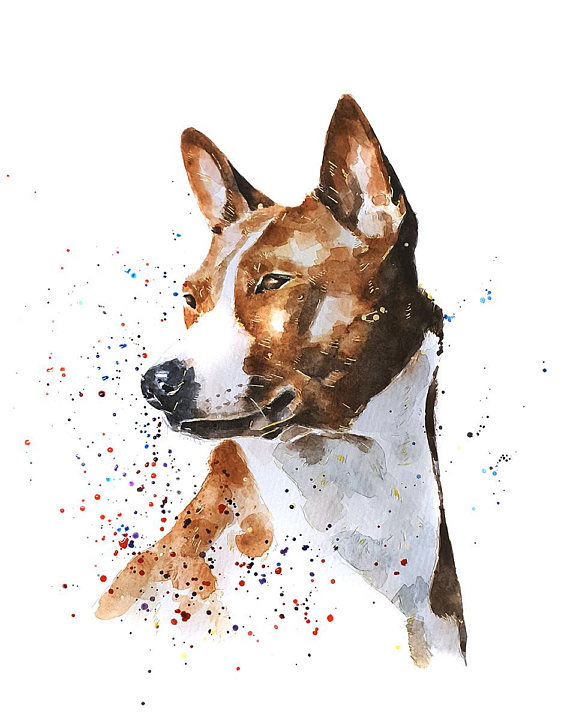 The Basenji is one very interesting breed. That it is one of the oldest dog breeds on earth has been proved by DNA testing, but long before such scientific advances, cave paintings in Libya from 6,000 years before Christ depicted Basenji-like dogs. When the Pharaohs ruled, the Basenji was there, likely gifted by visitors from Central Africa. After the ancient Egyptian civilization fell, the Basenji was still there.

Central African Pygmy tribes hunted with Basenjis for several millennia (and possibly ate the ones that couldn’t keep up). Today, the Basenji is there still, living as she has for thousands of years. It’s said that the dogs are so valued by tribes that a Basenji not only costs more than a wife, but has equal status with its owner.

The first mention of the breed may have been made in 1868 by Dr. George Schweinfurth in who studied flora and fauna in Central Africa. He wrote of the Nyan-Nyam tribe, described their dogs, and of how the dogs wore “little wooden bells around the neck so they should not be lost in the long steppe-grass.”  An earlier mention was made in 1682 when Father Merolla da Sorrento described a dog he saw in the Congo that was a match for the Basenji, but it was Schweinfurth’s account that is considered the first reliable description of Basenjis living among the Pygmies.

The first exhibition of Basenjis in Great Britain was in 1895 when the dogs were called, “Lagos Bush Dogs,” “African Bush Dogs,” or “Congo Terriers,”  but sadly, the dogs died of distemper soon after the show. In 1923, Lady Helen Nutting brought six Basenjis back to England from the Sudan. Traveling in a large crate on board a ship through cold and wind between Marseilles and Tilbury, the dogs made it to England, were placed in quarantine,  and given great care, but after receiving their vaccinations, including distemper, the dogs fell ill and all died.

The next attempt to import the dogs was in 1929 with Mrs. Olivia Burns. The first dogs she imported didn’t survive long enough to to reproduce, but she had greater success in 1936 and became the first person to successfully breed Basenjis in England. She exhibited the puppies the following year at Crufts where they were an instant sensation. These dogs became the foundation stock for the breed.

As an aside, the breed earned its present name long after it was “discovered” – in the 1930’s. The name Basenji translated in English means “bush thing,” and translated in Swahili, the name means name means “wild and violent.”

In America, the Basenji made an unofficial debut in April, 1941 when a small female eventually named ‘Congo’ stowed away aboard a West African Line freighter. She was found emaciated among the ship’s cargo of Coco-Beans when it docked in Boston 21 days after its departure from Sierra Leone. The more “official” debut was later in in 1941 when famous animal importer, Henry Trefflich, brought two Red and White Basenjis from the Congo on September 4. The dogs, a male named ‘Kindu,’ and a female named ‘Kasenyi,’ along with four other Basenjis that came from later imports, can be found in the pedigrees of nearly every modern basenji in the United States. 1941 was also the year Basenjis were successfully bred and raised in the United States.

Basenjis were officially recognized by the American Kennel Club in 1944.

A wonderfully comprehensive time-line of the breed can be found here.

Image: “KC Basenji” in watercolor by Eddie Kagimu can be purchased here.