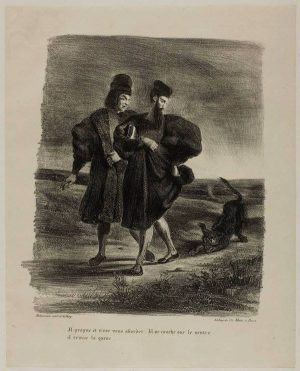 If we were all held to the sentiments of the 16th century, most of us would be accused of being witches and warlocks, so pity poor Heinrich Agrippa. While it’s true that he authored several magical and astrological treatises, it was his affection for his dogs that got him labeled as a master of the dark arts. Agrippa kept two dogs, a black male he named “Monsieur” and a bitch called “Mamselle” – and can you imagine? Agrippa allowed “Monsieur” to sleep on his bed, and even eat beside him. This convinced many of Heinrich’s contemporaries to believe that Monsieur was Heinrich’s “familiar” (an animal-shaped demon that serves as a domestic servant and spy). Perhaps “Black Dog Syndrome” (which has been challenged) has its roots way back then because a black dog turned up in the Faustian legends as the devil in disguise. In Goethe’s play, “Faust,” Mephistopheles, the evil spirit to whom Faust sold his soul, is first seen as a black Poodle (sorry, Poodle people).