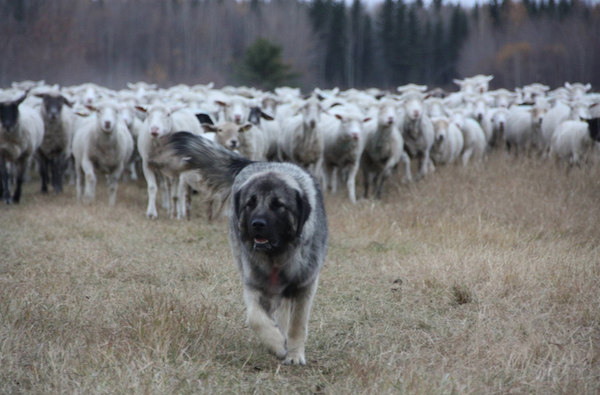 It can be difficult to know what to believe on the Internet. So often, information about purebred dogs is written either by people who don’t like them, don’t know them, or writers who need “filler” material and aren’t particularly careful about where they get their information.  When at all possible, National Purebred Dog Day prefers to get its information from the people who know a breed best – its owners and heritage breeders.

Such is the case with regards to the Sarplaninac (pronounced shar-pla-nee-natz) or Yugoslavian Shepherd Dog. When the Sarplaninac was featured on our Facebook page as a Purebred of Interest back in the summer of 2015, we learned a number of things about this breed from their owners, and below were a few take-away things we learned during those fabulous two days:

If the breed’s named is “googled,” results can include images of viscous dogs lunging and attacking, however the dogs in those photographs were provoked into such reactions. Sars are very protective, but viciousness is not what the breed is about, and, in fact, is a serious mischaracterization.  When carefully bred, and properly raised and guided, Sarplaninacs are true guardians, not guard dogs, and they need protection from cretins who breed and promote fighting dogs. These magnificent canines just want to work their livestock, and be with their families.

Most owners agreed that the Sars isn’t a good breed for the average dog owner, let alone a first time dog owner. This is truly a working breed and does best with a flock to protect, and land on which to roam. This is a large, opinionated dog who can needs a confident owner in charge. Socialization is a must!

The breed’s gentle face and fluffy coat can mislead strangers into thinking they can hug the dog, but this is a mistake to make with any dog;

Sarplaninacs are good with the children in their family, but having kids means having other kids come over to play, and kid play can mean rough housing, a bit of a challenge for a Sarplaninac’s protection instincts. Potential owners need to be aware of this. The breed is incorruptible, independent, reliable, and protective, but not snappy. They are devoted to their master but aloof with outsiders, and are generally calm until there’s a threat to its flock or family,  and then, as they say, it’s “Katie, bar the door;”

A bored Sarplaninac can quickly become a destructive Sarplaninac, and they can chew! Some Sars are epic diggers, as well, and often like to create a cool place in which to lay outside. Be prepared to be fill holes;

Owners must be prepared to have solid fencing to keep their dogs in;

Many Shar owners feed raw. One owner wrote, “Mostly raw here too, deer, moose, elk, chicken, goose, eggs, supplemental kibble for working and companion, depending on the time of year & availablility. Mine aren’t hearty eaters and seem to prefer a varied diet. They will eat probably the equivalent of 3.5-4 cups of kibble a day if on straight kibble and some days they will eat nothing;”

A Sar’s feathered and full tail is normally carried down behind the rear legs when standing at rest or just “hanging out.”  When the tails go up, there is either a threat, or the dogs are play fighting with each other;

Sarplaninacs are used in “predator friendly” ranching. Predator/Wildlife Friendly is an international certification of Ranchers who employ non lethal and wildlife friendly practices on their ranchers. No shooting or trapping of wolves or coyotes ensures that habitat is available for wildlife and implementing measures to reduce conflict between ranchers and wildlife.

As part of the Purebred of Interest feature, we included a bit of history which appears below:

This LGD was bred for centuries in the former Yugoslavia in the Sharplanina region of Serbia and Macedonia, but the dogs are also found in other areas such as Korab, Bistra, Mavrovo and Pelister. It’s still used in its country of origin to protect flocks against predators, but Sarplaninac breeding was controlled by the State until the 1970s when it wasn’t legal to export the dogs from Yugoslavia. We hope to be corrected on this if we’re wrong, but we’ve read that the first Sarplaninac to arrive in the U.S. was actually carried off a mountain by mule.

As we mentioned earlier, there’s a good deal of interest in the Sarplaninac from parts of the world where there is interest in Predator Friendly Ranching. Under Yugoslavian president Tito, however (who owned a Sarplaninac, himself), the Sarplaninac was used as a military dog to guard installations, munitions and barracks, and as a patrol dog.

From 1930, the Sarplaninac was registered with the F.C.I. under the name, Illyrian Shepherd Dog, but in 1957, the F.C.I. accepted a motion proposed by the Yugoslavian Federation of Cynology to change the breed’s name to “Yugoslavian Shepherd Dog Sharplanina.” At present, the breed is recognized by the UKC, but not the Canadian Kennel Club or American Kennel Club (AKC).

Image of a working Sarplaninac in Canada by Louise Liebenberg‎

10 thoughts on “The Sarplaninac You Should Know”