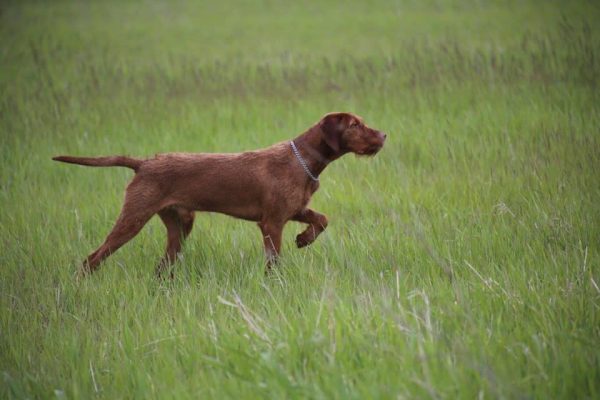 Astor z Potattal was a solid brown German Wirehaired Pointer who may have looked like this. Like others in his breed, Astor was a versatile gun dog –  biddable, amusing, and intelligent – all wrapped up in a stylish weatherproof coat.

We don’t know if Astor stood out in his own breed, but he is remembered today for having fathered the litters of two Vizsla lasses, and thus sired the foundation of the Drótszőrű Magyar Vizsla, or Wirehaired Vizsla (drótszőrű meaning “wirehaired,” and “Magyar” the Hungarian word for Hungarian).

“It seemed like a good idea at the time,” is typically the phrase used to justify an action that turned out poorly, but the “good idea” that breeder, József Vasas (Csaba Vizsla Kennel) had back in the 1930s really was a good idea that has endured. 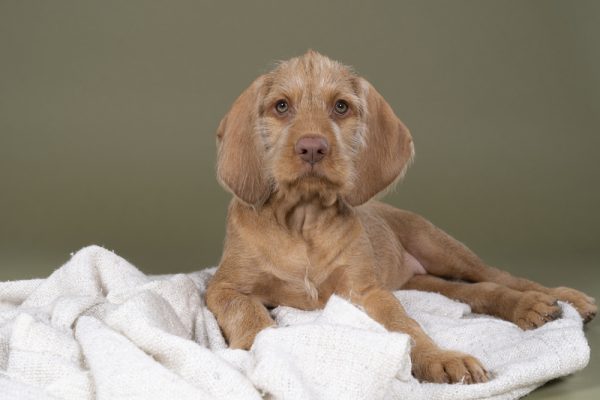 We should go back to the beginning when Vasas formally initiated the development of his Wirehaired Vizsla idea by submitting an application to the Hungarian Vizsla Klub with a proposed outline. Few readers will be surprised that his idea created controversy in the club, but some members agreed to try to develop the breed. Vasas joined forces with Laszlo Gresznarik of de Salle German Wirehaired Kennel to create dogs that had the wiry coat and stronger boned frame of one breed with the versatile athleticism of the other. From the Wirehaired Vizsla Club of America: “The first individuals with three-generation pedigrees fulfilled the dream by inheriting the color and other characteristics of the Vizsla while at the same time passing along the somewhat heavier bone structure and wiry multi-layered coat of the German wirehaired pointer. Dia de Selle was the first WHV to be shown on June 6, 1943.”

When reviewing breed history, some sources inject the name of Koloman Slimák, himself a breeder, judge, and hunter, who took what Vasas and Gresznarik had started and ran with it. Sources vary on what other breeds Slimák used to further develop the Wirehaired Vizsla, but many of them believe the Irish Setter, Pointer, and more GWPs were included. The breed club in the United States makes no mention of Slimák that we could find.

Ultimately, efforts resulted in an easy to train gun dog with a strong desire to please.The WHV is very birdy, and has a strong pointing instinct. Dogs retrieve naturally, take to water readily, and tend to hunt close to their boss, always keen to stay in contact. Owner/hunters revel in their dogs’ relaxed pace that translates into a full day of hunting, day after day. One person employed at a hunting lodge was quoted as saying, “I’d grown immune to hunting because it’s part of my work here at the lodge. But since I got my WHV…I’ve developed an enthusiasm for hunting like I’ve never had before, not even years ago when I got my first dog. I’m actually disappointed when a guest wants to hunt with my flusher instead [of my Wirehaired Vizsla].”

The breed became eligible to compete in the AKC’s Sporting Group in 2014.

Image: Shared by Char Traub of her Wirehaired Vizsla