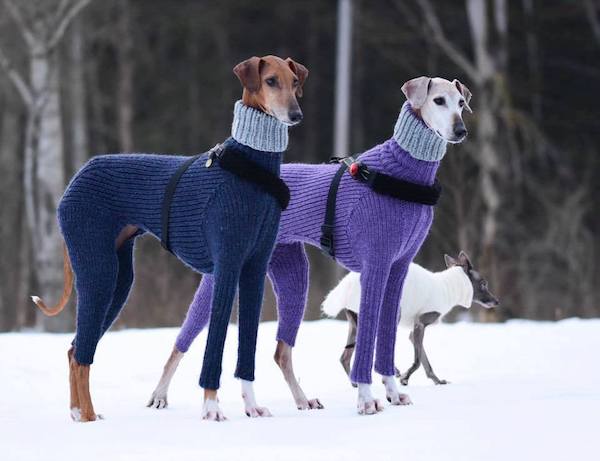 Oh, to be able to wear tight knits and not show love handles or a muffin top.

The Azawakh is a marvelously exotic breed to many of us, and not just because it’s still considered a rare breed in the United States. There are aspects to the breed that make it exotic among most other dogs!

Like most sighthounds, the Azawakh has a lower percentage of body fat than other breeds. Most dogs, for instance, have around 35% body fat, while a Greyhound has 17%, on average. Thus far, we’ve not found actual numbers for the Azawakh, but it’s thought to be slightly lower than a Greyhound’s. This is important to remember during medical procedures involving general anesthesia. A high area to body mass ratio causes these dogs to cool off more quickly, and dogs should be kept warm –  with heated blankets, if possible. Fat also plays a role in the administration of anesthesia. As the concentration of anesthesia in the blood falls, the substance leaves the brain, returns to the bloodstream, and ends up in body fat. When the concentration level in the brain falls below a certain level, the dog wakes up. Over several hours, the levels keep falling,  but more slowly as the agent leaks out of the fat and is metabolized in the liver. Since an Azawakh has less body fat, brain concentrations remain higher for longer so that the dog stays unconscious longer, and because the liver metabolizes the anesthesia more slowly,  the blood concentration can stay high enough to keep the dog groggy, and even in a stupor for hours, possibly even days.

Yes, it’s an old breed. Genetic studies have found that in its chromosomes is found a rare allele (GpiB) that exists only in the Euro-Asian wolf, the fox, the jackal, and some rare Japanese breeds. Scientists believe this suggests that the Azawakh evolved long before other breeds appeared in the region. That said, Shar-Pei, Chow-Chow and Pekingese owners, be in awe of your breeds, too. They have the same allele.

If you are a seasoned dog person, you may already know that many Azawakh are fed millet and goats milk in their native land. Interestingly, all puppies regardless of breed produce the lactase enzyme in their small intestines, this to deal with the hydrolysis of lactose found in their mother’s milk and convert it to galactose and glucose. After weaning, this goes away. Not in the Azawakh. An adult produces the lactase enzyme for the whole of its life which is why these dogs can have goat’s milk, yogurt, and other fermented dairy products during their live.

Another thing: Lymphatic nodes are visible in most Azawakh cheeks, largely because of the breed’s exceptionally thin skin. It tends to be most obvious while the dog is teething. Owners and veterinarians should be aware of these “odd swellings“ lest something more serious is suspected.

Don’t miss the list of reasons for not to own an Azawakh!

Image of El-Adini Adiza & Bani-Bangou Kel Tamaschek of Norway, photo by owner, Inez Blix.  We believe the jumpers are from the Canine Haute Couture knitting shop owned Malin Eriksson, and if someone could provide us with an active link to the shop, we’d be happy to include it.