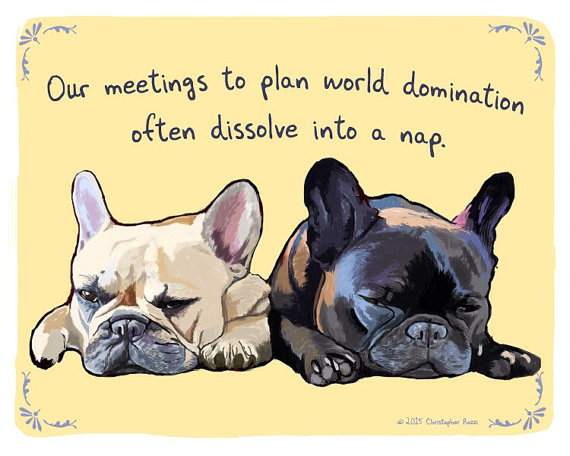 What does the French Bulldog have in common with the Great Dane and Australian Shepherd?  None are from the country cited in their name. The French bulldog isn’t French, it is English, its origins in Nottingham (a lace-making hub), to be precise.

Why the “French Connection?” Blame the Industrial Revolution. English lacemakers lost their jobs in following the Industrial Revolution, and without income, their living conditions deteriorated.  France still valued tatting (lace-making), and many of these artisans crossed the English channel to settled around Calais in Normandy. They took their dogs with them, and in France, the Frenchie’s popularity outgrew what it had been in England. The dogs were charming, and useful! Many of these workers lived in restricted dwellings with a proliferation of rats that the dogs quickly dispatched. The Frenchie got its Boule-Dog Francais name, and from that point on, France became the breed’s adopted home country.

This marvelous image is by Christopher Rozzi of tinyconfessions. As well as being an artist, Rozzi is also a comedian who has “channeled the innermost thoughts of canines and felines” and put those thoughts as well as their portraits in a book, “Tiny Confessions: The Secret Thoughts of Dogs,Cats and Everything.”

See more of his work on Etsy and Facebook