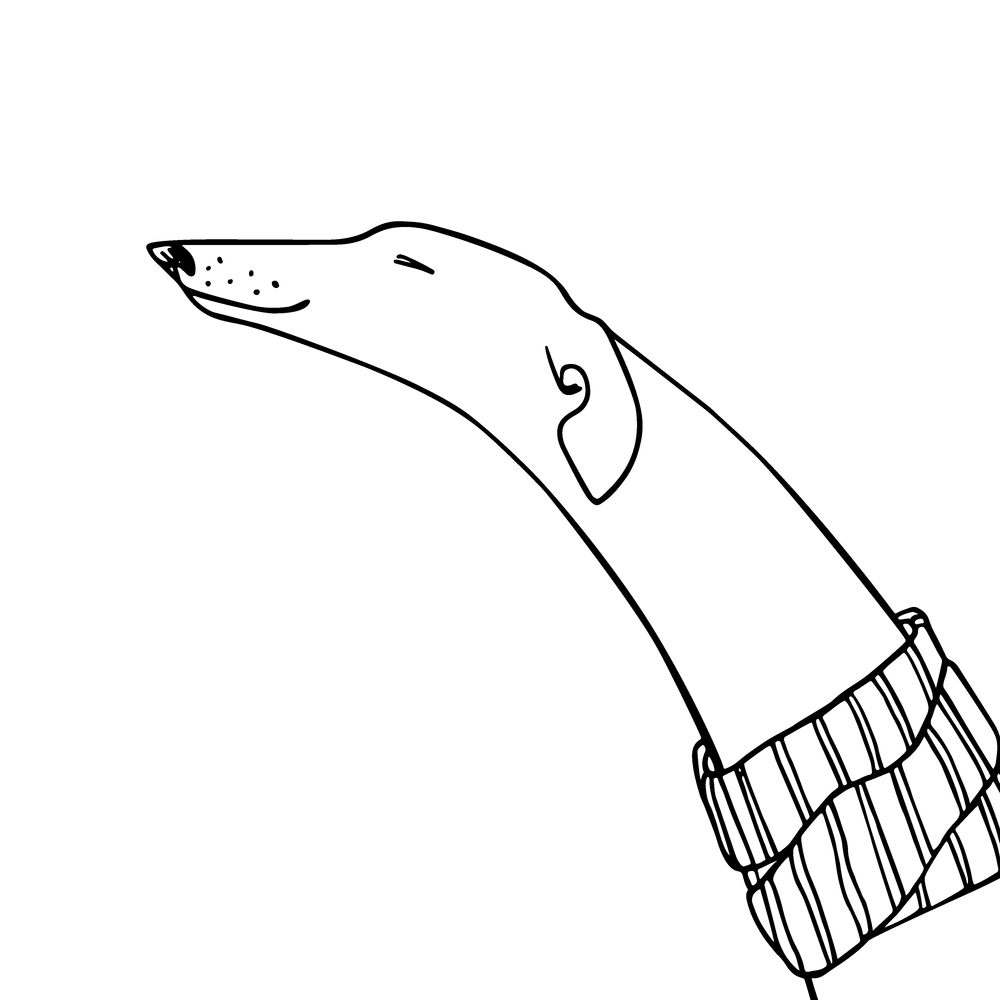 Scroll down and take a good look at the neck and head of the brindle Greyhound below. What do you notice?

Maybe the photo below makes it more obvious:

It might not be something you would know unless you had to buy a collar for a Greyhound, but what we hoped you would notice is that his neck is as broad as the broadest part of his head. That fact makes the drawing at the very top of this post not that much of an exaggeration.

This is a result of the breed having a dolichocephalic head, which is to say that it is long and slender (the term coming from the Greek words meaning, “long” and “head.”) Dog skulls have about 50 bones; in dolichocephalic dogs, these skull bones have elongated proportions, and it is especially pronounced in the jawbones. Artists may think this is nature’s gift to them, the clean, long lines of this elegant breed, but it is nature’s gift to the dog. This type of head gives a Greyhound a long, powerful set of pincer-type jaws capable of extending a “snatch and grab” maneuver while they are running pretty darn fast. As the Illustrated Standard for the breed says, “the strength in the jaws and neck of a well muscled Greyhound is quite amazing.”

This type of head also means they can slip out of a standard collar, one reason we see extra wide collars on sighthounds (and you thought it was to show off that aristocratic neck!) In fact, Bedouins didn’t typically put collars on their sighthounds when they were coursing in the desert.

At this point, we’re going to go all “techie” on you as we explain the Cephalic Index. This is a numerical scale for comparing the breadth of a dog’s head relative to its length.Breadth is measured across the widest part of the head, and length is measured from the back of the skull to the tip of the nose. Dogs with a low cephalic index have long faces (conversely, dogs with a high cephalic index have flat faces). A dog is regarded as dolichocephalic if it has a cephalic index below 75, which is to say that the breadth of its head is less than three quarters of the length of its head. Among the lowest Cephalic indexes is the Greyhound’s at 42.2 as compared to a Cephalic index of 87.2 in a Shih Tzu.

There is so much about the Greyhound that is astounding, from their different physiology and metabolism to how they deliver blood from the heart. One would never know from the demeanor of this sweet breed that under the skin lurks a marvel of nature.