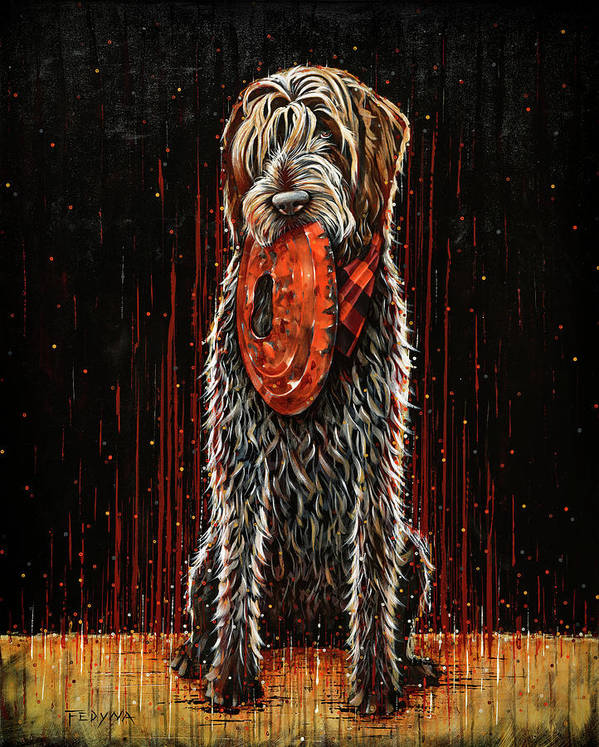 On the face of it, the Wirehaired Pointing Griffon would seem to share little with the Danish-Swedish Farmdog, but what it does have in common is a history in which more than one country can claim it. For that reason, debate still exists in some circles on whether the Wirehaired Pointing Griffon is Dutch, German, or French since a well-to-do Dutchman (Eduard Korthals) launched the breed, and developed it on both German and French soil. Unlike the Farmdog whose name reflects two countries, the WPG has no such geographical “pointers” in its moniker. Overall, however, most sources lean towards it being considered French because the parent club (which is also the largest breed club) is in that country.

What the breed’s handle does reflect is a coat well suited to work in the elements, and that it does supremely well. Because these tough, powerful pointers are trainable for field, forest and water work, from upland birds and waterfowl to hare, pheasant, and even big game, it is one of the top choices for serious bird hunters looking for a versatile hunting dog. Not for nothing is the breed’s nickname The Supreme Gundog.

In his book, The Complete Guide to Bird Dog Training, John Falk describes the breed as “very definitely the closest-working and about the slowest, most deliberate pointing breed available in North America.”

Unlike most water retrievers, Griffs are still pointers through and through on dry land. And unlike most pointers,  Griffs are unbothered by retrieving a duck in cold water which was Eduard Korthals goal – a dog with a strong instinct to retrieve on land and in water.  They tend to range a bit closer than a typical pointing dog, and are great at picking up singles. They will go through the thickest brush to retrieve. They have been described as methodical and thorough workers, and this makes the Griff an ideal walking hunter’s breed.  Others describe them as a breed in which training can take a bit of time because the dogs do things on their own schedule, or in “Griff Time.”  In the words of one owner, “You simply cannot rush a griffon.”

As admirable as the breed is in the field, we confess a weakness for these goofy muppets with the silly smirks and what can only be accurately painted as a twinkle in their eye. As eager as they are to please, they can have mischievous nature which keeps their families entertained. That said, when it’s time to go hunt, they are all business, and a joy to watch as they have an almost feline style of moving. With their strong hunting ability, comical nature, signature facial hair, calm personality, and affectionate loyalty, it’s a puzzle as to why Pointing Griffons are somewhat rare in the United States; fewer than 150 puppies are born in the country each year.

If you’re anywhere near Des Moines, Iowa early next month and would like to see some of these amazing dogs for yourself, visit the National Specialty from September 8 – 11, 2022. Learn more here.

Image: “Frisbee Fetcher” by Ric Fedyna is available as art, and in lifestyle and home decor items here