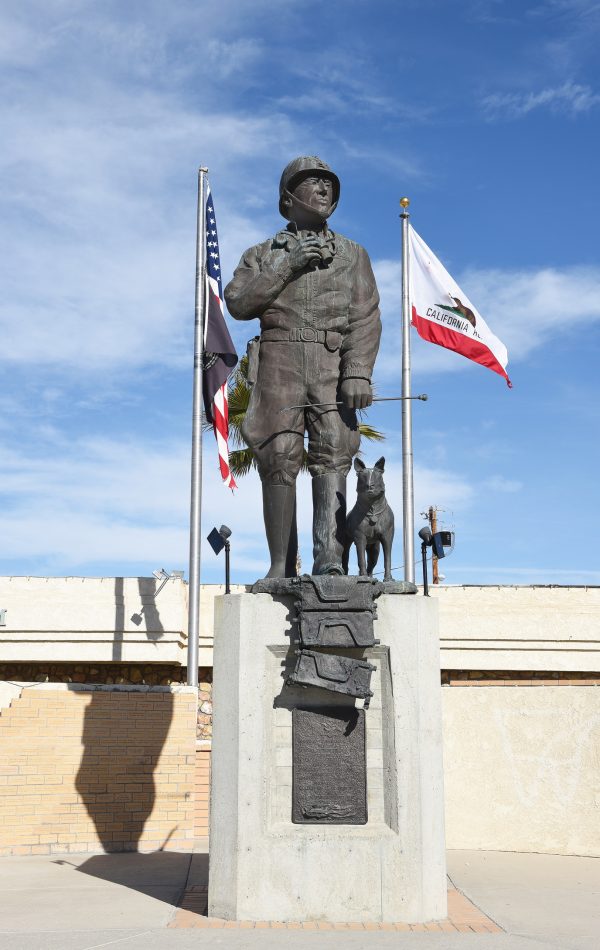 Of the several statues of General George S. Patton, the one situated behind Jefferson Hall Library at West Point has particular cause for its location: Patton graduated from the Military Academy later than others in his class, and he claimed it was because he never could find the library. For this reason, his statue was placed facing the library along with binoculars in his hands so that he might find the building more easily.  Humor aside, Patton was required to repeat his first year at West Point after failing math. The wake up call inspired him to study with a tutor, and he worked hard to keep his grades up. Eventually, Patton graduated 46th in his class of 103 cadets.

What Patton lacked in scholarship, he made up in athleticism. He was one of the foremost fencers in the United States, and as a 26-year-old Army cavalry officer, Patton was selected to compete in the first-ever Olympic modern pentathlon at the 1912 Summer Games in Stockholm. He finished in fifth place, and  might have medaled were it not for a controversy in the pistol-shooting event. While the judges believed Patton missed the target with one of his shots, Patton argued that he was so fine a shot that one of his bullets actually traveled through a bullet hole he had already made. Patton was also selected to the 1916 Olympic team, but the Games were cancelled due to World War I.

Among the statues commemorating “Old Blood-and-Guts” (as he was called by his men), only one includes his Bull Terrier, Willie, so named for William the Conqueror. This monument is at the General Patton Memorial Museum in Chiriaco Summit, California. More on that further down.

Fom 1933 to 1935, Patton was Master of the Cobbler Harriers,  a pack that hunted in the Blue Ridge Mountains near Marshall, Virginia. Soon after World War I, however, Patton got a Bull Terrier as a family pet, the beginning of a love affair with the breed. “Tank” was that first dog, so named for the general’s obsession with tanks. Though Tank was deaf, he still noticed the arrival of Patton before anyone else did.

Patton had several Bull Terriers throughout his life, but more is known the first and last dogs than the ones in the middle.

Willie was Patton’s last Bull Terrier, of course, but Patton was not Willie’s first owner, nor was Willie the dog’s original name. He was first called “Punch,” and he had been the companion of a British Royal Air Force Officer flying night bombings over Germany. The airman was said to have loved taking Punch along with him on bombing raids,  but for some reason, one night he didn’t. The officer never returned home, and Punch was left without an owner. It was the combined efforts of Lady Leese, the wife of a British general serving in the Mediterranean theater, along with Kay Summersby, General Eisenhower’s driver, who helped Patton find a dog, and this was how Punch became Willie.

Not everyone was enamored with the man or the dog. When Stars and Stripes cartoonist, Sgt. Bill Maudlin, met Gen. Patton in March 1945, he described what he saw this way:

Beside him [Patton] lying in a big chair, was Willie, the Bull terrier. If ever dog was suited to master this one was. Willie had his beloved boss’s expression and lacked only the ribbons and stars. I stood in that door staring into the four meanest eyes I’d ever seen.

Willie was Patton’s constant companion, but twelve days after a freak auto accident, Patton died from the injuries he had sustained.  Willie was sent to Patton’s widow and their daughters in California. The poor dog suffered from separation anxiety for months before settling in, but he lived on for almost 12 years and quietly passed away at the family farm where he is buried in an unmarked grave. Since General Patton believed in reincarnation, perhaps in his next lives he still owns a Bull Terrier.

As of this writing, Memorial Day is a few days away, and it seemed a good time to mention General Patton, his dog Willie, and how both are memorialized at the Patton Memorial Museum. The Museum opened on November 11,1988, coincidentally Patton’s one-hundredth birthday.