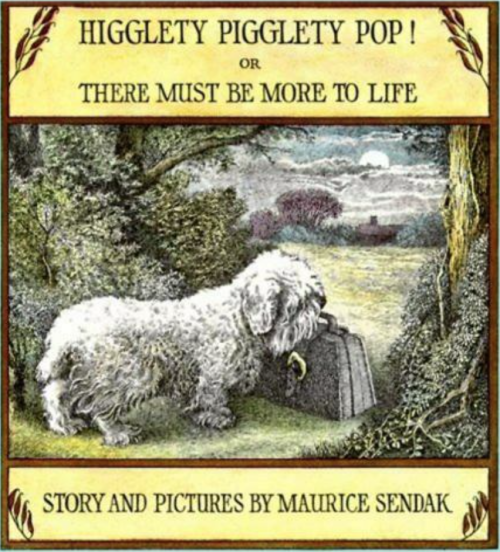 Jennie has a pretty good life.  She has enough to eat, a sweater to keep her warm, a comfy pillow, and most importantly, she is loved. But somehow, Jennie feels there has to be more to life. She makes the decision to run away and see the world. She packs her bags, hits the road, and oh the wonders she sees: A cat driving a truck, a pig wearing an advertising board…and most wondrous of all, Jennie becomes the star of the World Mother Goose Theatre!

Jennie, a Sealyham Terrier, is the main character of Maurice Sendak’s children’s book, Higglety Pigglety Pop!  According to the L.A. Times, of all the books Sendak wrote, he claimed that Higglety Pigglety was his favorite. One might think that terriers were Sendak’s favorite type of dog since a previous book, Where the Wild Things Are, also included a terrier, this one a West Highland White Terrier, but Sendak (who died in 2012) was actually a German Shepherd Dog owner. Though he did once own a Golden Retriever, he had a string of German Shepherd Dogs throughout his life. “Herman,” named after one of Sendak’s literary idols, Herman Melville, was his dog at the time of his passing. Herman, in fact, appeared in two of Sendak’s books. Before Herman was “Max,” and before Max was “Runge” (named after a 19th century German painter).

Though not everyone approves of the Monks of New Skete German Shepherd Training and Breeding program (some found fault with what they say are outdated dominance training), Maurice Sendak was a friend of the monks for many years and offered their program support through the Maurice Sendak Foundation. Past recipients of the Foundation also included The Good Dog Foundation, P.S. 188 The Maurice Sendak Community School, Yaddo, Portland Opera and many others.

In 2008, The New York Times reported that Sendak told an audience, “I hate people.” Instead, he said, he preferred the company of dogs, like Melville. We suspect that there are days when most of us can agree.

Image: Cover of Higglety Pigglety Pop! which in this case is a paperwork being sold on Ebay here.