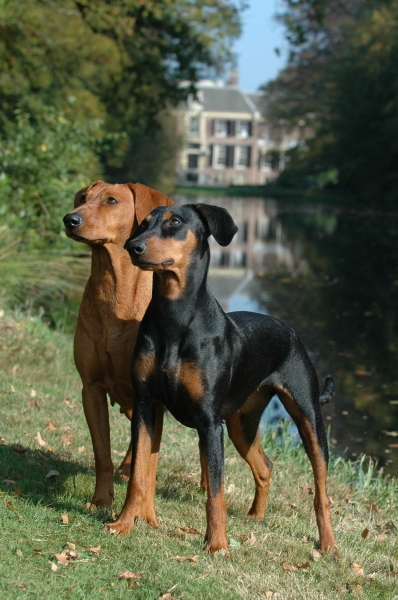 The German Pinscher comes in several glorious colors and color combinations: Black and tan, Liver and tan, Red in various shades (a rich vibrant medium to dark shade is preferred), fawn (or Isabella), black and blues with red/tan markings….

The two primary color varieties, however, are the red, and the black and tan. Respectively, these are produced by the dominant yellow allele A y and the black and tan allele a t of the agouti locus. The breed also carries the dilution gene which impacts eumelanin (black and liver), although red can be lightened, as well.

The breed standard that was developed in 1959 originally included two additional colors, a pure black, and a black and silver (or salt and pepper) called silberpinsch. It was in the period following both World Wars that the solid black, and silberpinsch colors were lost from the genetic lines, and breeders were unable to recreate the breedings required to resurrect the colors.  Indeed, the entire breed was almost lost. Not a single Pinscher litter was registered in West Germany between 1949 and 1958.

We came across another color said to have been lost during the wars: Harlequin. And this is where things get a bit cloudy. Most sources believe that this was likely not a breed color, but a reference to an extinct cousin of the German Pinscher, the Harlequin Pinscher.  The latter was actually recognized by the Reichsverband fur das Deutsche Hundewesen, Germany’s governing canine agency in the 1920s, as well as by the FCI. No registrations of the Harlequin Pinscher have been recorded since the 1930s and it’s thought to be extinct in its purist form.

That said, another source maintains that the original breed standard from 1880 did include a merle/harlequin, as well as a double merle version, but both were removed in the 1920s because of controversy.  It’s a moot point.  The German Pinscher Club of America strongly opposes the breeding of German Pinschers to perpetuate colors that are not recognized by the AKC standard, and they include, but aren’t limited to, colors such as chocolate with tan to rust markings, harlequin, merle and tri-colored pinschers.  There is no shortage of people selling Harlequin Pinschers on the internet, however, and the caveat, “buyer beware” comes to mind.