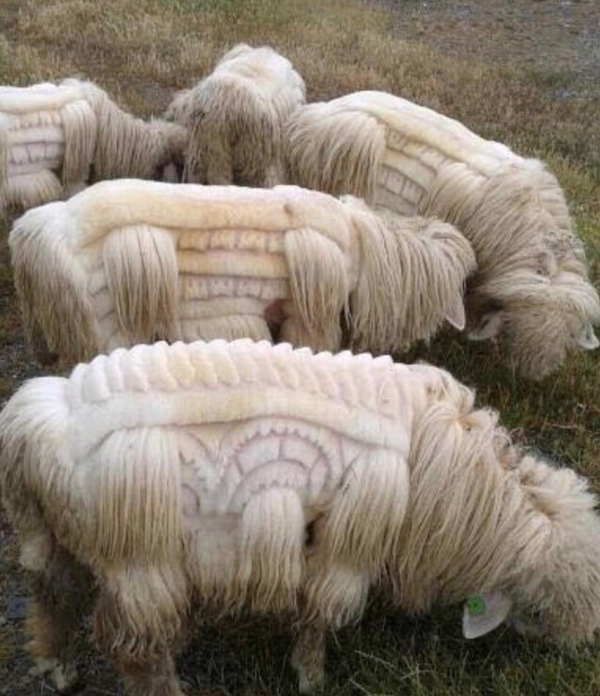 By and large, our posts are determined by breed, timing, coincidence, suggestion, or whim. Usually, we want to impart an interesting fact, cool product, or breed specific public art we’ve came across. Sometimes, it “feels” like it’s been too long since we wrote about structure, or a certain breed, but occasionally, like right now, we simply must share an amazing photograph, and figure out how to write a post around it.

Across the world, ranchers with sheep face challenges that preclude a one-size-fits-all sheepdog. Some have enormous flocks, some have difficult terrain (be sure to watch the video in that post),  some need barkers, while others may need heelers, distance drovers, or “living fences.”  We’re tempted to say that the sheepdogs that watch the sheep seen here must have an appreciative eye for artistic shearing. But we digress.

Many of us are familiar with the ancient Italian breed, the Bergamasco, but some of us never get past its flocking to learn more 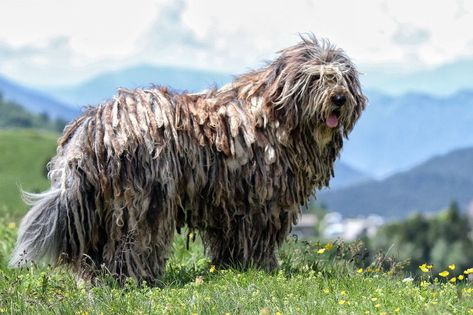 about the breed’s herding style. This is a highly versatile dog considered by many to be a European tending breed. He is an upright, loose-eyed dog who can work close to sheep using his presence and size to “motivate,” but he is also gentle and not excitable so as not to disturb the sheep.  In tending, the dog can also create a boundary as a living fence while rotationally grazing the stock:  The dog walks alongside the flock with a slow, even, deliberate gait moving back and forth, and in the presence of a shepherd, a Bergamasco will walk behind him to notice any gesture intended to give him direction.

It’s important to note that Bergamascos (or, some say, Bergamaschi) are seen as mountain sheepdogs built for strength and endurance (indeed, the breed was sometimes called the Alpine Sheepdog), and as such, they are compactly built with a well-developed chest and relative short necks with strong muscles. This lends itself to a low center of gravity which is more efficient in difficult, uphill or mountainous terrain. In a show ring, judges who understand this recognize that the Bergamasco’s movement is not like that of other herding breeds who, as the Bergamasco Sheepdog Club Of America notes, are speedier on flat terrain, “with a longer extension of the limbs and higher footing off the ground. The Bergamascos gate is more focused on resistance, strength and low gravity with foot closer to the ground. The movement can be slower than other herding dogs.” Again, this is a mountain sheepdog, so in some dogs, the rear toes point outward because they aid efficiency in rear traction in uphill movement. Also from the breed club: “A characteristic of the breed is the short humerus. The deltoid muscle and the great dorsal muscle which flex the humerus on the shoulder blade acts with greater power on a short axis. The combination of strong shoulder muscles and short humerus are the best instrument to guarantee resistance and potency for a dog which moves up and downhill where extra effort is required.”

It’s not every day that we see such artistry shorn into the coats of sheep, and it’s not every sheepdog that is as unique as the Bergamasco.

3 thoughts on “The Bergamasco: A Mountain Sheepdog”