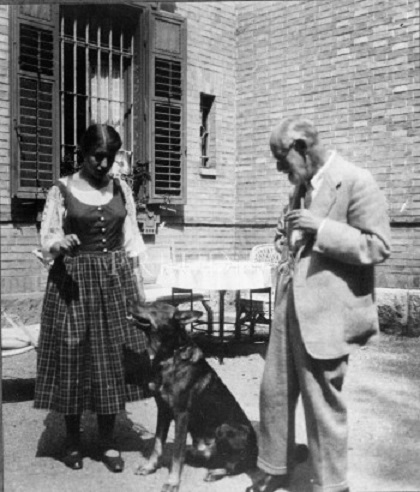 It it’s not true, we are unfazed, because for those who know and love German Shepherd Dogs, it could be true.

“Wolf” was a GSD who belonged to Sigmund Freud. He’d bought the dog to be a companion for his daughter, Anna, living with him at the time. As the story goes, Anna and Wolf came across some soldiers during a walk. Stupidly, the men started to shoot blank rounds into the air which startled Wolf, as it would have most dogs. Wolf ran and ran, but eventually leapt into a taxi cab at the precise moment the door was opened to deposit a customer. The cabby later reported that the dog kept leaning towards him and lifting his head which baffled the driver until he realized that a tag hanging from the dog’s collar bore an address.

For his trouble, the taxi driver was tipped handsomely by Freud.

Was it true? Hard to say. German Shepherds are wicked smart, and the 1930’s were simpler times.  For our part, we choose to believe the legend.

Image of Anna Freud, Sigmund Freud, and “Wolf” found on Pinterest and happily credited upon receipt of information