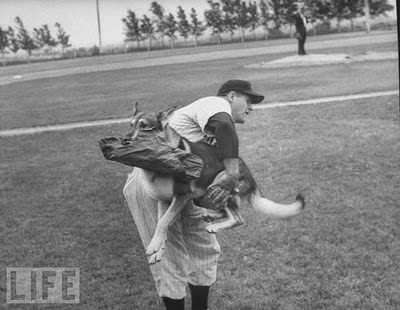 When Chicago White Sox pitcher, Chuck Eisenmann, was recovering from an arm injury in 1946, he got a German Shepherd puppy he called, “London,” so named for the time he was stationed in London during the war. He developed a very special relationship with London, a rapport possible only because of the dog’s extraordinary intelligence.  Eisenmann’s baseball contract included a clause allowing the dog to travel with the team, and there were plenty of anecdotes that resulted from London’s antics on the field (i.e., London ran the bases when asked to). One such incident came after Eisenmann had quit the team and was now writing a sports column and managing a local ball club. The other team’s manager wanted to eject the dog off the field, and Eisenmann instead motioned to London to approach the manager and push him off the field.  A Life Magazine photographer happened to witness the incident, and what followed was a three page spread about “The Dog That Made The Team.”

Eisenmann gave up professional baseball when “the dog started showing signs of greatness.”  “London” would go on to launch a Canadian industry with his first film, “The Littlest Hobo.” It inspired the television series about a vagabond German Shepherd Dog who wandered through communities helping people and animals encountered along the way. In the 1960s, The Littlest Hobo became to Canada what “Lassie” was to the United States in the 1950s and 60s.

The first series was done with “London,” but other dogs appeared in subsequent versions of The Littlest Hobo, also appearing in a rebirth of the series in color in 1979. Eisenmann would eventually have three German Shepherd Dogs named London, as well as dogs named Litlon, Lance, Hobo, Venus and Raura. All were trained to be trilingual, and each had an average vocabulary of 1500 words. Personal appearances were part of their work, and by the time Eisenmann put the brakes on his career in 1992, he estimated that he and his dogs had performed three shows daily for eight months out of eighteen years. Along the way, they had appeared on the Today Show, the Mike Douglas Show (huge in its day), the Tonight Show, and Betty White’s Pet Set.

10 thoughts on “The German Shepherd Who Was The Littlest Hobo”