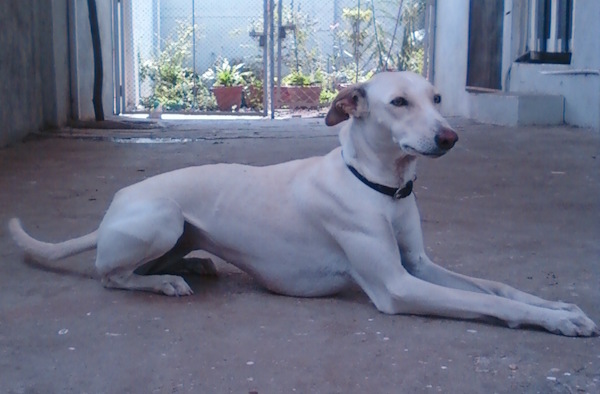 In hematological terms, the Greyhound is known as dogdom’s Universal Donor because over 85% of Greyhounds have a blood type that allows their blood to be used in all other dogs.  Greyhound blood is unusually rich in red blood cells, and it has lower than average white blood cells and platelets. Given that there are eight blood groups in dogs out of which DEA 1.1 is considered the most important for safe blood transfusions, locating a universal donor for a dog in need is extremely important.

India has its own version of a Universal Donor, and that is another sighthound, the Chippiparai, indigenous to the state of Tamil Nadu in the southern part of the country. Though this was announced in 2016 after eighteen months of research at Tamil Nadu Veterinary and Animal Sciences University, Dr. G. Baranidharan, a blood bank officer, had made this discovery years before. During operations by the Indian Peace Keeping Force in Sri Lanka in the late 80s and early 90s, some forty-two dogs made up of Labrador Retrievers and German Shepherd Dogs contracted ehrlichiosis, or tick fever from spending long periods of time in trenches and bunkers. Their anemia required blood transfusions which they received at the Veterinary College in Chennai’s canine blood bank, and every dog was saved. In the course of this event, Dr. Baranidharan discovered that like the Greyhound, the Chippiparai was a safe Universal Donor. Further studies found that like the Greyhound, the Chippiparai has an increased prevalence in the negativity of the antigen DEA 1.1 (73.3%) .

The Chippiparai, thought to be a descendant of the Saluki, is found today in the region around Periyar Lake. Primarily used to hunt wild boar, deer and hare, is is also a companion guard dog. Once bred by royal families in Chippiparai in Virudhunagar district Tamil Nadu, the Chippiparai was kept as a symbol of royalty and dignity by Tirunelveli and Madurai rulers.

Sadly, like many Indian breeds, the quiet Chippiparai – sometimes referred to as the Tamil Greyhound –  is now very rare, and in imminent danger of extinction.  The breed is currently recognized by both major Indian Kennel Clubs, but most owners don’t seem to registered their dogs or keep pedigrees.  Perhaps recognizing that they now have the only other canine Universal Donor in the world will compel Indians to recognize yet another reason to save their wonderful breed.