A common reaction at seeing a black German Shepherd Dog for the first time is to assume it is a mixed breed, another breed altogether, or something new in the German Shepherd world, such has been the prevalence of the more common sable or Black and Tan – but it’s not new!

We cite Sherlock Holmes to make a point.

Before Benedict Cumberbatch, Robert Downey Jr., or Jeremy Brett played Sherlock Holmes, arguably the next most popular actor to have portrayed the detective was Basil Rathbone. Starting with The Hound of the Baskervilles, Rathbone would go on to make twelve more Sherlock Holmes films, and many radio broadcasts over the next seven years. 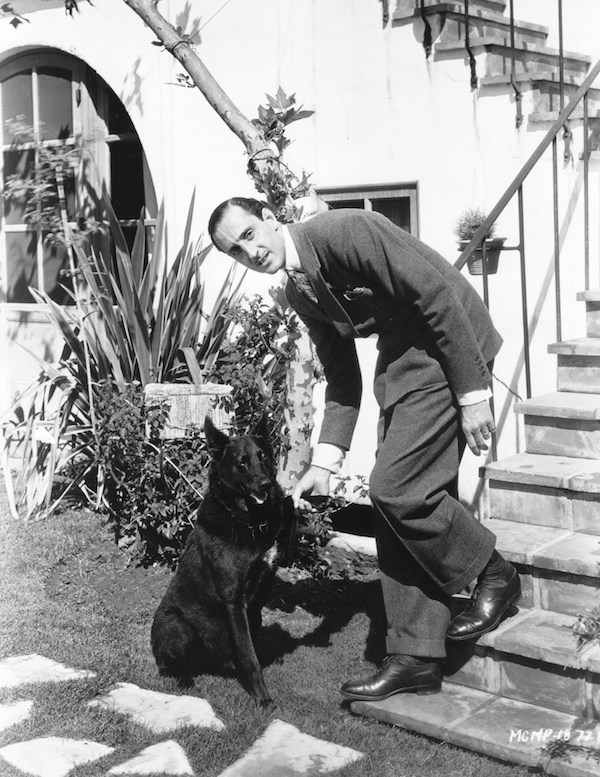 Rathbone and his wife, Ouida, were avowed dog lovers, and the first dog they bought together as a couple was “Moritz,” a black German shepherd they saved from being put down for having killed a sheep. Moritz lived with the Rathbones for eight years, and was Basil’s constant companion.

In this breed, the order of color dominance is: Sable, Black and Tan, Bicolor, and black; the black coat gene color can either be dominant or recessive which means that there’s a possibility that a German Shepherd that is not all black can hold the gene and produce solid black German Shepherd pups (black German Shepherd puppies who are born black, btw, will stay black forever). Since black is completely recessive to all other genes, both parents must give a black gene for a puppy to be black, and the only color that dog will pass on to its puppies is black.

To reiterate, the striking black GSD comes from a rare combination of recessive genes for the black pigment eumelanin which sets him apart from the majority of breeds, who inherit a solid black coat from a simple dominant gene. As far as we can tell, there is no quantitive evidence that the black dogs are any different from other German Shepherd Dogs.

We'd bet the ranch on this royal straight flush, and we're betting that NPDD's Playing Card Project putting your dog's image on a playing card along with his or her name and breed will be hugely popular when the decks are available for purchase. But first, we have to sell those cards.

It's the best money a club can spend out of its public education budget, and owners, what a fabulous way to thank your breeder for your beloved puppy by putting their sire or dam on a playing card.