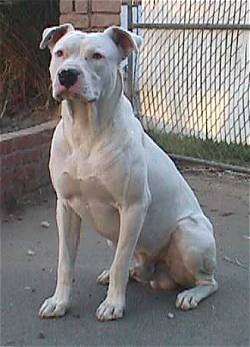 Earlier, we shared a Volkswagon commercial that surprisingly, and to our delight, included a Dogo Argentino, not a breed you see much in the public eye. Right now, however, we’re going to chat about another “Dogo,” and that is the Dogo Guatemalteco, Guatemala’s only native breed, and the country’s Official National Breed.

Unlike the well documented history of the Dogo Argentino, there is a substantial amount of disagreement, if not mystery, about the origins of the Dogo Guatemalteco.  Photos from the 1890s exist of what some say is a Dogo Guatemalteco, a dog that belonged to the Galusser family, and there are other photos from around 1910 that show similar dogs. Others scoff and maintain that these were simply dogs that were used in the development of a breed that didn’t really come together until the 1930s. That’s when breeder, Hector Montenegro, began experimenting with crossing various breeds to create a superior guard dog, and that would make this Dogo a relatively new breed.

One would think, however, that the dogs used to develop the Dogo Guatemalteco would have been recognized for what they were since it’s thought that crosses between the old style Bull Terrier, Dalmatian, and Boxer (with, perhaps, a little Cordoba Fighting Dog and Dogue de Bordeaux added) were used.

What isn’t in dispute is why the breed was created in the first place, and that was to provide protection to the families that owned them.  For all the wrong reasons, the breed became a much feared guard dog across Guatemala with a reputation for being fearless and aggressive, but this was largely due to the fact that the dogs were rarely socialized and always kept chained. And as is so often the case, indiscriminate breeding eventually lead to a lack of consistency in type. In time, enough breeders grew concerned that their breed was becoming a “mish-mash” of types.

It was Dr. Arturo Chavez, a veterinarian, who developed a written standard that he felt best exemplified the breed after examining Dogos from across the country.  At one time, the Dogo Guatemalteco was known as the Guatemalan Bull Terrier, but Chavez renamed the breed the Dogo Guatemalteco because it had become more like a Mastiff than a Bull Terrier. He also instructed breed owners how to properly keep and socialize their dogs because of his concern over temperament, and happily, this re-education has “stuck” as there has been a welcomed reversal of aggression.  The Dogo Guatemalteco now is considered quite trustworthy around children it knows well, and many are kept as family dogs.

The Kennel Club of Guatemala (ACANGUA) granted full recognition to the Dogo Guatemalteco, but no other kennel club has.  While its prospects in other countries beyond Mexico, Honduras, El Salvador, and Belize isn’t grand,  the future of the breed at home is very secure.  It’s very popular in Guatemala where its numbers are increasing, and who knows. In time, Dogo Guatemaltecos might find recognition in another major registry.