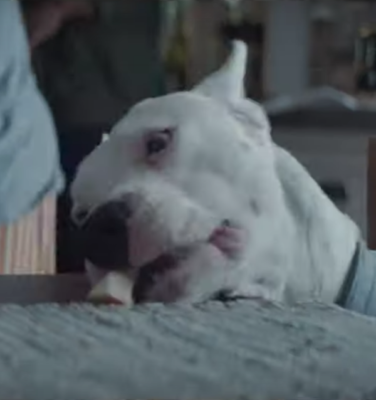 Veteran NPDD readers know how delighted we get when an uncommon breed shows up in a television commercial. Still, we didn’t expect to see this one in a Volkswagen commercial with Johnny Cash singing, “These Are My People,” from 1972:

Pat yourself on the back if you recognized the white dog as a Dogo Argentino in the latest installment of the “Drive Bigger” series. This one takes us into the mornings of four different American families, and how marvelous that the family dog of one of the clans is a Dogo.

Large, powerful, and athletic, the Dogo Argentino looks like what it is: A muscular breed capable of stopping and holding prey four times its body weight. Developed to hunt dangerous big-game (including the lethal wild boar), the Dogo is instantly identifiable by informed dog people with its short, completely white coat and magnificent head. With its imposing appearance, the Dogo might inspire caution before approaching, but this courageous breed was not developed to be aggressive toward people, but to be a stable dog that can seamlessly make the transition from field to family dog.

Dogos adore their people, and happily show affection and loyalty. While thoughtfully-bred Dogos are friendly and cheerful, this is not a breed for everyone, and not especially for an inexperienced dog owner. The Dogo requires a strong leader who is fair and steady, not someone who regards his relationship with the dog as an equal partnership. There must be accountability and control over the dog’s behavior – but this is not news to experienced dog people. It’s simply common sense when it comes to living with a large, powerful breed.

The brainchild of the Johannes Leonardo Agency, the “Same Difference” commercial was directed by big-screen talent, John Hillcoat,  but it is maddening to us that in this day and age, getting information about a dog actor is still challenging. For that reason, we welcome any information about the Dogo that appears in the ad.