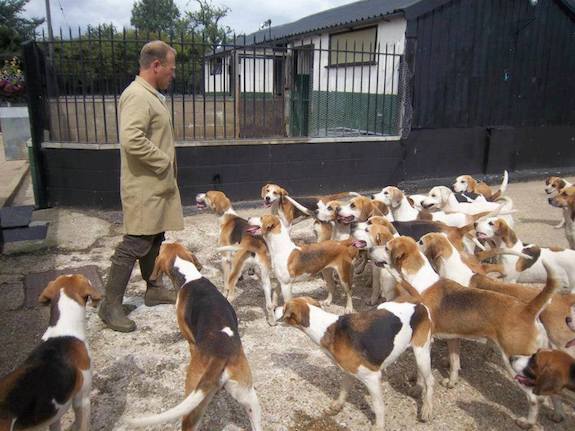 If you take part in performance or dog show events, do you think “smack talk” is an invention of today’s competitor?

Do you think that people who diminish or dismiss the difficulty of handling one breed over another are something new?

In a description of hunting hares with hounds written almost one hundred years ago, the author, William Taplin, described three distinct kinds of hounds used:

“The large slow southern hound is adapted to the low swampy, marshy lands, so conspicuous in many parts of Lancashire; as well as those in Norfolk, and various others bordering upon the sea.

“The small, busy, indefatigable Beagle seems appropriated by nature to those steep, hilly and mountainous parts, where it is impossible for the best horse and boldest rider to keep constantly with the hounds.

“The hounds now called Harriers…are the only hounds to succeed in those open countries, where, for want of covert, the hare goes five or six miles an end without a turn.”

Within the same body of work, The Sporting Dictionary, and Rural Repository, Volume 1, Taplin added a remark that was less than flattering to hunters who worked with the aforementioned breeds:

“Hare hunting is, in the estimation of the sporting world, held in a certain degree inferior to the other two, (so far as hard riding and personal courage is concerned;) because the exercise is not so violent, nor is the chase of equal duration. Indeed, strong advocates for stag and fox hunting hold this sport exceedingly cheap, and satirically say, “it is better calculated for the initiation of juveniles, the entertainment of women, and the amusement of those gentlemen in the more advanced stages of life, who, like the old woman in the farce, is highly pleased with the sound of the fiddle, though no longer able to dance.”

And undeserved. Hare hunting with packs of hounds was amongst the oldest field sports in Europe and predated the traditional English sport of fox hunting by a lot.  Indeed, in an article by Karen Davison-White, Hunting With Harriers, she points out that the Harrier was bred specifically for hunting hare, and as such, is one of the oldest of British breeds. In the same article, she describes Harriers to be much like little kids: By nature, quick, athletic, busy, and up to mischief. More than once, we’ve come across expressions of delight in watching these dogs work. Each hound has more personality than perhaps s/he has to right to have, and because Harriers hunt in a very different way than a foxhound (casting in a circle and hunting in the open), they are eminently suited to hunting hare,  and interesting to observe.

That said, watching them work is getting harder to do. The Association of Masters of Harriers and Beagles stud book Volumes from 1891 to 1900 volumes listed 107 registered packs of Harriers. Currently, only 71 current hare hunts are still operating. Given that there are only eighteen packs of Stud Book Harriers in England, and some three hundred in the world,  true hare hunting Harriers in Britain have earned them “Rare Breed Status.”

*Because of early sportsmen who had a poor opinion of hare hunting with Harriers, our post title, Harrier Habromania is born from the word, habromania, which means insanity featuring cheerful delusions.

Image: The Dunston Harrier pack in their kennel, photo shared by Donna Smiley