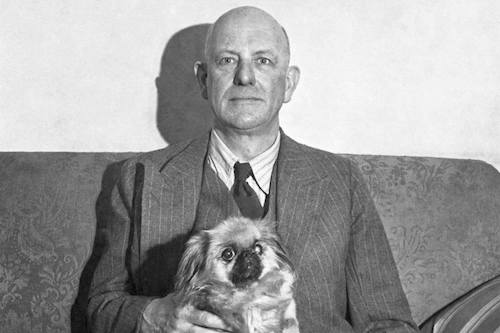 He was great friends with Arthur Conan Doyle, the genius behind Sherlock Holmes, but he, himself, was no slouch, either; He created “Jeeves,” the uber-competent valet of a wealthy, idle, and silly Londoner named, Bertie Wooster. “He” was P. G. Wodehouse (1881–1975) and his own life was the stuff of novels. His childhood was a bit repressed, largely because of a father who was a magistrate in Hong Kong, and a mother who was the consummate ice queen and forbidding battle-ax known as ”the Memsahib” by family members.

He counted as the loves of his life his step-daughter, golf, and his boarding school’s rugby team, but it’s probable that at the top of that list were his Pekingese. Though Wodehouse also owned Dachshunds, he once wrote, “All one really needs in life is two good friends, books, and a Pekingese.” In fact, Wodehouse was said to have judged people on whether they were “sound on Pekes.” This landed him in a bit of trouble in WWII. His reluctance to put his Peke, “Wonder,” into quarantine left him in France at a very bad time. He was taken prisoner when Germany invaded and sent to an internment camp. It didn’t put him off Pekes, however.  In his middle age, he was described as appearing to “wade in a sea of Pekingese” by visiting friends.  We think we would have liked Wodehouse.

Image of P.G Wodehouse and a Peke/Bettman/Corbis