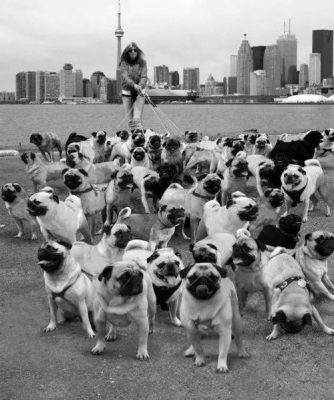 We love collective nouns if for no other reason that many of them are inexplicable: A “murder” of crows, a “convocation” of eagles, a “wisdom” of wombats, a “knot” of toads, a corps of giraffes – who came up with these?

When we read that a group of Pugs is called a “grumble,” we assumed it was a made-up term, but no,  there are repeated references verifying it. In Holland, the Pug is called the mopshond which comes from the Dutch, “to grumble.” It stands to reason that this is the source of the collective noun for Pugs, though we don’t know why there aren’t collective nouns for other breeds.  Since, say, Affenpinscher is German for “monkey dog,” might not a group of Affenpinschers be called a Troop, Barrel, Carload, Cartload, or Tribe, all collective nouns for monkey? We think that in the vast spare time that each of us has, we should solve this glaring gap once at for all. What should be the collective noun for your breed, and tell us why!

10 thoughts on “Your Call: A Grouping of your Breed”