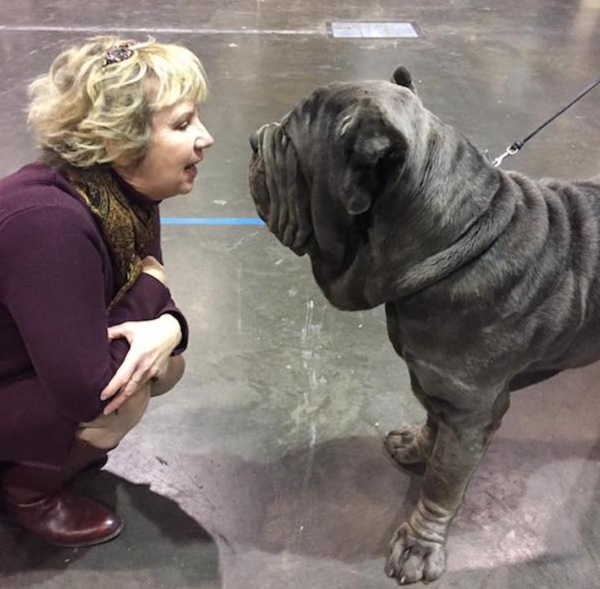 When we learned that this Neapolitan Mastiff was from Hungary, the heretofore quiet, reserved dog that had been keeping his distance from us lit up when we spoke Hungarian to him. He didn’t forget the language that told him he was a good boy.

As the dog was trying to ascertain how we knew what to say, we were marveling over that head which, as you can see, was easily twice the size of our own. There is a reason the breed standard refers to their breed as having an “astounding head.”Rocking impressive wrinkles and excess skin is intended to “throw the fear of Jove into their adversaries” (source: AKC).  That said, the degree of loose fitting skin shouldn’t be overly excessive to the extent that it impacts the dog’s health. The head must be square and flat between the ears which shouldn’t be round, or be with low set, overly long ears. A Nea must have a double dewlap and the required feature of the lips forming an upside-down ‘V’. We think this photo illustrates all this nicely.

What isn’t seen here is the dog moving, but once we said goodbye, we watched him take his leave. He had the stride of a bear when he was pacing, and then we remembered that when trotting, a Neapolitan moves like a lion. Despite their ferocious look,  Neapolitan Mastiffs are not attack dogs and should never be trained to be one.