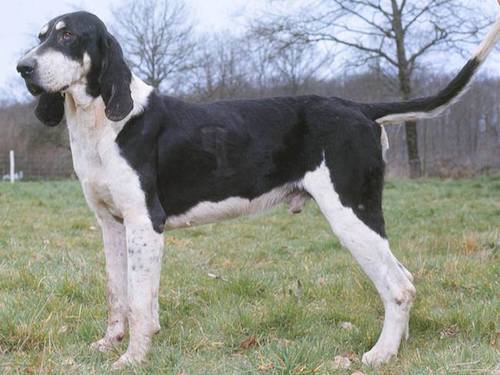 Meet the Chien Francais Blanc et Noir, also known as the French White and Black Hound. Occasionally, one of these dogs may have a spot of tan on the base of his upper thigh, and this is called a “roe buck mark.”

Industrious, reliable and sturdy, the breed’s pendulous ears, sagging jowls, beefy dewlap, and a long muzzle (preferably with an arched nasal bone) all serve to trap odors and scent as his nose sniffs along the ground. This superb scent hound is one of the three breeds that collectively are known as French Hounds, and are all considered rare, even in their native France (the other two breeds are the Chien Francais Blanc et Orange and the Chien Francais Tricolore),

This French White and Black Hound was developed in the last century by Henri de Falandre to hunt large game, especially deer, and he got it by crossing the Poitevin with the Bleu de Gascogne, and a little English Foxhound “thrown in” along the way.  Though the breed has been known for some two hundred years, the FCI didn’t accept it as a breed in its own right until 1957.

Why the hold up?

The breed was considered a working animal, and the owners of working dogs aren’t always interested in dog shows or breed standards. Nevertheless, the breed has been breeding true for a very long time.

The UKC recognized the Chien Français Blanc et Noir in 1996.  As of 2009, it was believed that there were some 2,000 dogs of the breed registered through the Fédération Cynologique Internationale, the vast majority of them working dogs in France.