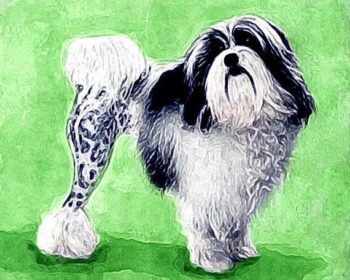 The “cup handle” tail is exactly what it sounds like: A tail that is carried up and over the dog’s back in an arc that touches the dog while he or she is moving. It resembles a perfect tea cup handle, so much so that one should be able to envision slipping one or two fingers through the “opening” as one would a cup handle.  A fine example of the “cup handle” tail is seen in the Löwchen whose plume touches her back when she’s moving. From the AKC breed standard: “The tail is set high and carried in a well-arched cup-handle fashion with the plume touching the back when the dog is moving.”

While other breeds may have similar tails, the Löwchen is the only AKC breed in which the words, “cup handle” are specifically used in the standard. The Shih Tzu, for example, should also have a “tea cup” tail, though with a copious amount of hair, the “cup handle” can be tougher to spot. From its AKC breed standard: “Set on high, heavily plumed, carried in curve well over back.”

Sometimes “teacup tail,” or “teapot handle tail” are the words used to describe essentially the same thing.  A significant part of the Papillon’s silhouette is its tail, a magnificent plume that is long, flowing, and arched over the back in a proud carriage. Its standard reads, “Tail long, set high and carried well arched over the body.”