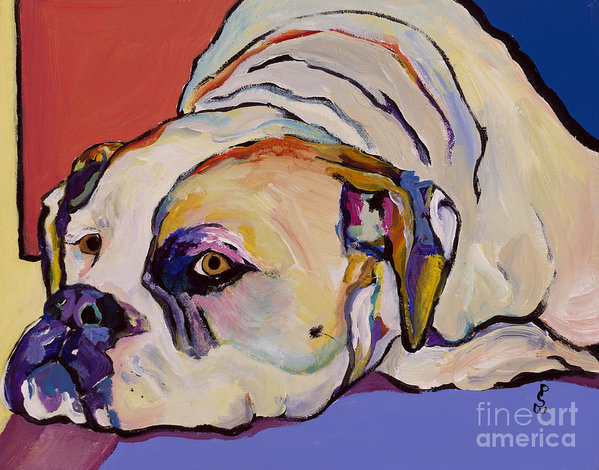 When the brutal sport of bull baiting was outlawed in England, the original type of Bulldog used in the “events” vanished. It seemed to have been replaced with the breed we know today as the English Bulldog. Working class individuals, however, hung on to their original bulldogs,  and when they emigrated to the American South, they brought along their dogs.

The American Bulldog continued to be developed as a general purpose working farm dog in the American South with a specialty in catching hogs and cattle. By the end of WWII, however, the breed once again nearly disappeared, and it might have had it not been for Dr. John D. Johnson, a returning war veteran, and Alan Scott, two breeders who helped revive the breed with a breeding program that maintained careful records and stayed true to the breed’s soundness and working abilities. Eventually, several distinct lines evolved, each emphasizing the traits needed to do a specific job, but the best known lines are usually referred to as the Johnson line and the Scott type.

Dogs in the Johnson line are commonly referred to as ‘bully;’ they are bulkier, more muscular, and heavier boned and have larger heads with more stop, a shorter muzzle and a more pronounced undershot bite.

The Scott type is commonly referred to as ‘standard.’ These dogs are more performance oriented, and thus are athletic dogs who are sleeker, maintain less bone, have longer muzzles, more moderate stop and a less extreme undershot bite.

Before you wonder, yes, many American Bulldogs have crosses to two or more of the original lines, and these dogs are considered to be hybrids with characteristics of more than one of the original lines of bulldogs. That said, both of the aforementioned varieties of American Bulldog are sometimes referred to as Southern Whites, or Old Southern Whites.

Lest you didn’t know, the American Bulldog is one of the fastest growing breeds in the United States today, but the quickest way to incur the wrath of an owner is to refer to the breed as a type of Pit Bull. This is entirely inaccurate and offends the vast majority of both American Bulldog and American Pit Bull Terrier fanciers.

The breed has far more interesting history than is presented here, and over time, we’ll get into the different aspects of its journey to AKC acceptance into the Foundation Stock Service (the United Kennel Club recognized the breed in 1999). For now, we congratulate American Bulldog owners and say, “Welcome to the fold.”