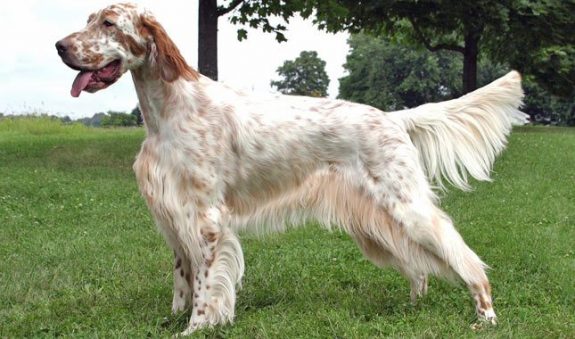 At the risk of stating the obvious, what passes for common knowledge about our respective breeds may be actually pretty interesting to someone outside that breed. Corded breed owners, for example, take for granted the process of grooming a corded adult, and for us (for we are such owners), the words “mat,” “split,” “trim” and “wring out,” to name a few, are liberally used in any conversation about maintaining a corded coat.

People who don’t exhibit a sporting breed, then, may not be familiar that the word, “flag” in setters and some retrievers refers to the fringe or feathering found under the tail of some breeds, hair that is long at the base and short at the tip. That beautiful silhouette seen in a show dog, however, doesn’t just happen.

To present a well balanced, neat outline, the tail of certain breeds typically calls for a bit of shaping to create the outline of a flag. In some breeds like the English Setter, the shape is a clearly defined triangle. In other breeds like on the Golden Retriever, the shape is softer in outline.

To create the tail “flag,” the groomer must make sure that the long hair (or feathering) on the tail is thoroughly brushed out with the coat lying in the same direction. The tail is held out level with the body, and longer coat that falls outside of the triangular shape is trimmed off leaving hair that’s broader at the base and tapered to a point at the tip. The proper length is determined by trimming the tail tip even with the top of the hock. Once the length is established, then the shaping can start. In some breeds, the shape will be more angular that in others, and the severity of the line is softened to a more natural look with thinning shears, or by cutting tiny v-shaped inserts into the coat with sharp straight scissors. 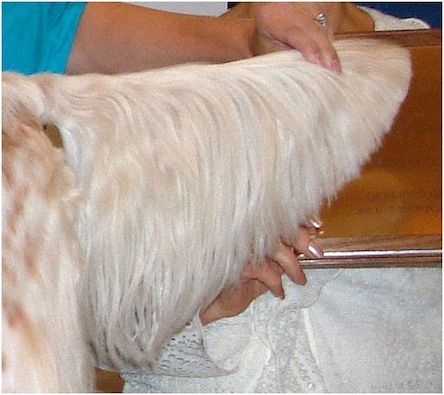 Photo found uncredited on Pinterest, credit happily given upon receipt of information

Once the shape has been established on the “flag,” the top of the tail needs to be inspected for any bulges or break in the line. Bulges close to the base of the tail are thinned with thinning shears to make the hair lie flat.
Some groomers prefer to brush and comb all the tail hair smooth, wrap their fingers around the base of the tail and slide their hand to the tip gathering up the hair (think of how you make a ponytail on your own hair).  Using curved shears, they simply trim off the desired amount of hair they want off, then recomb the tail so the hair falls naturally. Some groomers will let their hand slide down to the end stopping about one-half inch past the end of the dog’s actual tail. They’ll trim off the excess feathering in a straight perpendicular cut which they feel gives a perfectly tapered appearance to the remaining tail hair.
At the end of the day, the key to excellent grooming is not just an understanding of canine anatomy, but of a particular dog’s structure.  A flag tail should never be longer than the hock for a point of reference.

Bear in mind that a hunting dog may have a different cut than a conformation dog, and a beloved pet who never hunts or enters a show ring may be groomed differently from either of the aforementioned.