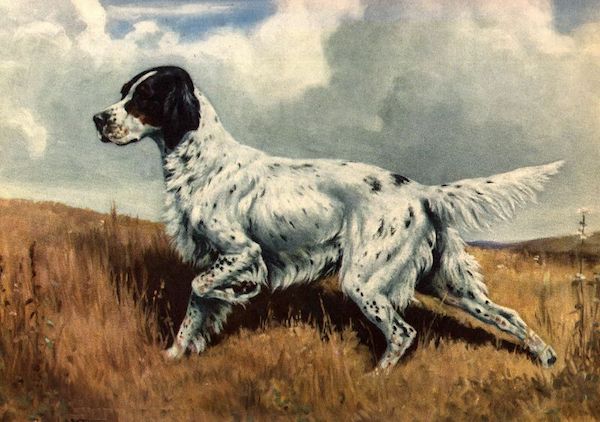 Fanciers know that there can be jargon unique to a dog’s breed, but figuratively speaking, one hand doesn’t always know what the other one is doing.  Put another way, “splitting coat,” for instance, makes perfect sense to a corded breed owner, but next to nothing to, say, a sporting breed owner unless they’re a show judge or have been “in” dogs for a long time. If a fancier doesn’t always know the terms used in breed other than their own, it’s likely that the average dog owner doesn’t, either. Since our site is read by dog lovers from across the spectrum of experience, we like to share these terms on occasion.

We’ve all heard the expression, “raise the flag and see who salutes,” an idiom that means to float an idea to see what response will be. In dogs, “flag” has two different meanings.

To a heritage breeder, a bitch who “flags” her tail is receptive to being bred.  She’ll hold her tail up and move it from side to side to disperse her scent which in turn sends signals to “stud muffins” near her that she is good to go and ready for lift off.

To the owners of certain breeds, a “flag” still refers to a tail, but in terms of appearance.

In 1903, Rawdon B. Lee wrote a brief treatise on the points of an English Setter. He wrote:

“The Setter’s flag should have a gentle sweep downwards, and the nearest resemblance to any familiar form is to the scythe with its curve reversed. The feather must be composed of straight silky hairs; Close to the root the less hair the better, and again towards the point, of which the bone should be fine, and the feather tapering with it.”

Today’s AKC breed standard for the English Setter makes no mention of a “flag,” though it does specify that the breed should have “a lively tail.”

Interestingly, the Gordon Setter is the only setter which does mention flag: “The head is carried up and the tail “flags” constantly while the dog is in motion.”

The word is also to be found in other breeds:

In the English Toy Spaniel: “The feather on the tail should be silky and from three to four inches in length, constituting a marked “flag” of a square shape.” In the Longhaired Dachshund, the tail is “carried gracefully in prolongation of the spine; the hair attains its greatest length here and forms a veritable flag.”

Coat must make all the difference because the smooth coated Dachshund standard indicates that a“flag tail is a fault.”

A flag tail is also mentioned in the following breeds, and not as a good thing:

In the Treeing Walker Coonhound, the tail is “curved gracefully up, tapered and moderately long without flag or excessive brush.” In the Bluetick Coonhound: Tail is “well coated but without flag.” Saint Bernard: “The tail appears bushy, not forming a flag.” Later, the standard reiterates that a “rolled or curly hair, or a flag tail, is faulty.”

Pet owners of any breed are often curious to know if their dog is a “good” example of its breed, and finding out is spelled out in the breed standard. These documents aren’t just for breeders and dog show folk, they’re for everyone who owns a purebred dog and wants to learn more about it.