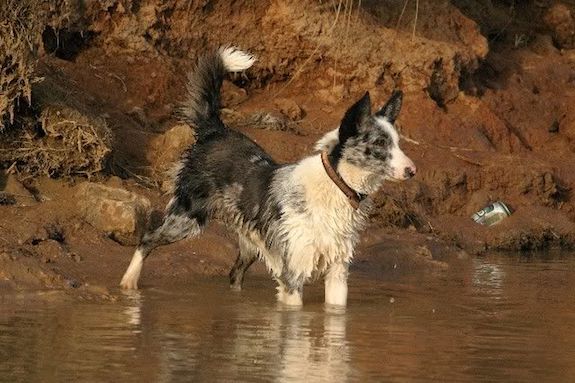 It is a sad business when a breed vanishes off the face of the earth, but in a manner of speaking, they live on in the breeds in whose ancestry they appear. The Tiger Dog was a strain of old German Shepherd Dog that was common in south Germany – especially in Bavaria –  but rarer elsewhere.  Because these merle colored dogs reminded people of tigers, they came to be called (wait for it) Tiger Dogs.

Some cynologists believe the Tiger was related to the Cane di Oropa from the Italian Alps, a mid-sized but powerful dog still used in the Western Alps to drive flocks of sheep and herds of cattle. Most Tiger Dogs became extinct over the course of time, but some of them became part of the modern German Shepherd Dog breed.

When European farmers settled in Australia with their Saxony Merino sheep in the 19th century, the dogs they brought with them were crossed with Tiger dogs imported from Germany to Australia, and their offspring were the ancestors of the German Koolie. It is in this manner that Tiger dogs survived into the 21st century.

2 thoughts on “How the Tiger Dog Lives On…”