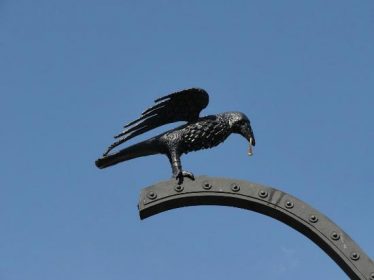 Game of Thrones notwithstanding, references to ravens appear throughout the world’s mythology, folklore and literature. One theory explaining why this bird has such stature is that as a flesh eater, it is associated with life and death, the dead, and with lost souls. In Swedish lore, ravens are the ghosts of murdered people without Christian burials. In Germany, they are damned souls.

Tourists to Hungary may have noticed a raven motif that appears on fences and rooftops throughout the country, but this raven has a ring in its mouth. As you might expect, there is a story behind it.

In 15th century Magyarorszag (Hungary), foreign kings did not fare well. Two died unexpectedly: Sigismund, who died in late 1437, and his son-in-law, Albert V of Austria, who died two years later of dysentery during an unsuccessful military operation. Other kings had to cope with plague, threats to the border, and court treachery. Following a good deal of tumult after the death of King Ladislas Posthumus, and despite dynastic claims of his uncle, Hungarian nobles met at a diet and a majority of them elected Matthias to be king in 1458 making him the first Hungarian-descended king in more than 150 years. Under his rule, Hungary became the first country to “adopt” the Renaissance from Italy. Mátyás was a benefactor of the poor; he created Central Europe’s first standing army, and made taxation of his subjects more equitable earning him the nickname, the “people’s king.” To Hungarians, he is known as King Mátyás, the greatest of all the kings.

History tells us that Matthias’ chosen surname was Corvinus derived from the raven’s genus (Latin corvus), and that he was also known as the Raven King. Indeed, a raven appeared on his family emblem, but why a raven?

There are several versions of an explanation.The Silesian Annals state that Matthias adopted the raven as his heraldic emblem after catching one of them stealing a ring that he had just taken off his finger. He chased the bird down and killed it in order to retrieve the ring. In memory of the situation, he took the raven as a symbol for his signet ring and crest.

Legend tells a different story. Following the election that made him king, Matthias’ mother sent for him with a raven that had a ring in its beak. The bird, it’s said, flew non-stop from Transylvania to Prague so that the King of Ravens could be crowned. The raven-with-ring motif became part of the family crest, and the family name, Corvinus, honors the bird.

Yet another account was provided by Antonio Bonfini, King Mátyás’ court historian, his version to be later recorded (if not embellished) by Heltai Gáspár, a 16th century Protestant minister, writer and printer.  In his version, Zsigmond, who ruled as king of Hungary between 1387 to 1437, was a notorious womanizer. On a trip to Transylvania, he was introduced to  Morzsinai Erzsébet, a great beauty.  When the king showed more than a passing interesting in her (winkie winkie), she insisted upon some security in case she became “with child.” As the story goes, King Zsigmond gave her a ring which would allow her admission into his court at any time, and he backed it up in writing.

Erzsébet did indeed give birth to a boy, János, and when the child was little, Erzsébet let him play with the ring. As he was playing in the yard with the ring, however, a raven swooped down and snatched the shiny ring in its beak.  Panicking, Erzsébet urged her brother to shoot the bird since their lives depended on it.  A good shot with a bow and arrow, he was able to recover the ring.

Ravens on the coat of arms of Hungarian-Hunyadi family

Erzsébet took the boy, the ring, and the written guarantee of admission and visited King Zsigmond who indeed kept his promise. He provided Erzsébet with gold and a carriage, and bestowed upon his son the town of Hunyad and all the surrounding property. He also gave János a crest showing a raven with a gold ring in its beak, and thus it became the Hunyadi family’s crest.  János’ would grow up to have his own son, and it was that child, Matthias (or Mátyás) who would go on to become Hungary’s most beloved king.

We often share legends associated with purebred dogs, but we also like to mix in the stories behind people associated with purebred dogs. King Mátyás famously said that he trusted a Kuvasz more than his men. Indeed, he never went anywhere without a Kuvasz by his side to protect him. He kept a large pack of Kuvaszok for hunting, and often gave a Kuvasz as an imperial blessing or gift. Furthermore, he bred his own line. There’s little doubt that Mátyás was the breed’s first, and possibly greatest supporter. After Mátyás’ death, the Kuvasz returned to being a flock guardian throughout the medieval period, but years later, another famous Hungarian would impact the breed. A nobleman, Count d’Esterhazy, became the first person to present the Kuvasz (two, in fact) at a dog show in Vienna in 1883. The first Standard was written two years later.