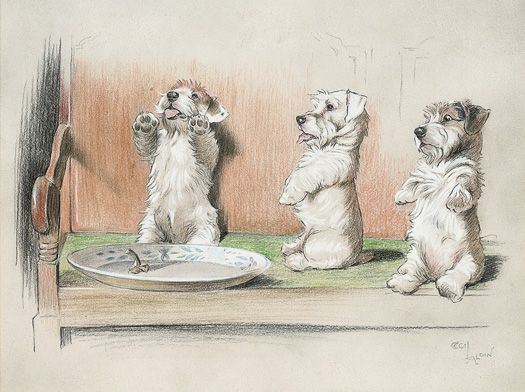 Few breed fanciers aren’t familiar with this famous kennel, and while people outside the breed don’t realize it, they saw a pair of Ilmer Sealyham Terriers walk out of a pet shop with Alfred Hitchcock if they saw the movie he directed, The Birds:

People of a certain age also saw Ilmer Sealyhams if they followed British royalty in the newsreels and magazines. “Pippin” and “Johnny” were often photographed with their mistress, Princess Margaret, and both were Ilmer Sealyhams. Ilmers appeared in another film, as well: A pack of them were part of the 1937 movie, “Storm In A Teacup,” starring Vivien Leigh and Rex Harrison. Watch the entire trailer below:

In fact, because Ilmer Sealys were imported by someone from almost every part of the world, chances are good that if a Sealyham Terrier appeared in the company of a famous person, it was an Ilmer-bred dog.

Their biggest promoter was their breeder, Major Sir Jocelyn Lucas. He said, ”You should buy an Ilmer Sealyham because, unlike the purely show dog, every Ilmer Sealyham is bred for brains as well as looks, and looks as well as brains ……..There is nothing to stop a congenital idiot becoming a show bench champion…… No adult is kept and bred from unless it is intelligent, bold and friendly.”

Lucas, an avid hunter, began his sporting career as a boy when he hunted with a pack of Smooth Fox Terriers. In 1909 at the age of twenty, he got his first Sealyham Terrier, possibly from Captain Edwardes, creator of the breed. After serving in WWI, he imported some Cerne-bred Sealyhams from the Netherlands, and in 1912, he bred them under the Cerne prefix. When he was thirty years old, he bought twelve Sealyhams from Captain Jack Howell and a hunting pack from Gladdish Hulk.

Ilmer Sealyhams are all descended from these dogs. Lucas, however, bred his dogs to be smaller, harsher coated, and with less extremes that he felt were showing up in the breed.  Ilmer Sealyhams were also bred to work. Lucas began training pups when they were around five months old, and those who lacked promise were placed in pet homes; those exhibiting qualities he sought were incorporated into his pack of 20-40 dogs.

In the 1940s, Sir Jocelyn created the Lucas terrier, a mix between the Sealyham and the Norwich terrier, when he decided that the Sealyham had grown too big to work efficiently. That breed is discussed elsewhere on these pages.