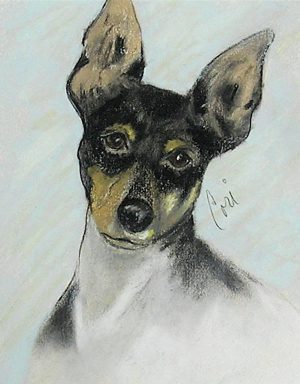 Let’s set the tone for this post with a bit of Glenn Miller. Scroll down:

It was the Modernaires who sang in this Number One hit song recorded by Glenn Miller and His Orchestra in 1942, and the “gal” of whom they croon lives in the southwest part of the state of Michigan in a city called (wait for it) –  Kalamazoo.

A number of cool things are located in Kalamazoo, including the Gilmore Car Museum, but its relevance to us in this post is that it is the headquarters for the largest all-breed performance-dog registry in the world, the United Kennel Club. More than 60 percent of the UKC’s 15,000 annually licensed events are tests of hunting ability, training and instinct, and very often, the UKC recognizes a breed long before the AKC does. Such was the case for the Toy Fox Terrier.

The first Toy Fox Terrier was registered with the UKC in Kalamazoo in 1936, though the registry had included the toy version of the Smooth Fox Terrier when it began registering the larger breed in 1912.  Later, in the mid 1920s, fanciers of the developing TFT petitioned the UKC to recognize them separately from Smooth Fox Terrier, and when it did,  the UKC classified them in the Terrier Group.  The UKC closed the breed Stud Book in 1960 to disallow any crossbreeding with the Toy Fox Terrier (a topic for another post).

It took 67 years for the AKC to get there. It’s not like there weren’t attempts to get this done before then. There were efforts in the 1970s, but they fell short of accomplishing the goal of recognition. It was tried again in 1994 when fanciers organized and started a nine year quest to get their breed recognized, and that happened in 2003. Long before then, the breed standard had been developed by the National Toy Fox Terrier Association, and figuratively speaking, the TFT was able to hit the ground running upon full acceptance.