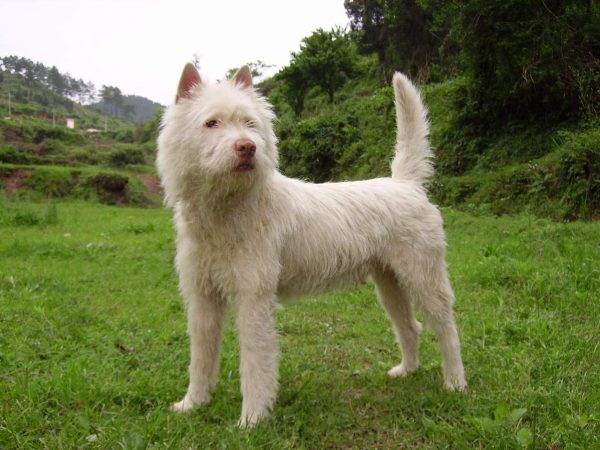 The government of China recognizes fifty-six official ethnic groups, and one of them is the Miao. The Miao are mountain dwelling people who live in primarily in southern China’s mountain country (there are some nine million of them in China), but the Miao are also in Vietnam, Laos, Burma, and Thailand. They speak languages of the Hmong-Mien family, and have interesting customs that you can read here.

They are also associated with an interesting and ancient dog, the Xiasi Dog, colloquially known to the Miao as the Bai Long Quan, but because the breed was raised mostly in the town of Xiasi, Kaili city, its official name is Xiasi Quan, also known as just “Xiasi.” The Miao raised these dogs for centuries, and according to experts, the Xiasi was already present at the beginning of the 11th century.  They were used to guard property, but also to hunt smaller animals that could be traded. 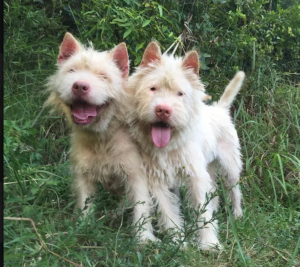 Sadly, and if sources are accurate, these days Xiasi dogs are bred to fight wild boars in competition, an activity that started around the 1960s when local farmers wanted to protect their farms from wild boars. For some owners, the “sport” is training for their dog to hunt wild boar, but for others, it’s a depraved form of entertainment. Given that fewer than 300 Xiasi dogs are believed to exist, these events are not only cruel, but exceedingly reckless for a breed so close to extinction. Needless to say, organizations have been trying to shut down this “tradition” for years, but local customs are exceedingly difficult to stop.

One hopes the sources are wrong. Xiasi Quan are loyal and affectionate dogs who bond closely with their people and are attuned to their moods and needs. They are fierce protectors, but gentle family dogs at home. They do have a strong prey drive, so they view small pets as game, and this makes for bad luck for a pet like a cat. The Miao, however, believe the the Xiasi is a sign of good luck that brings prosperity to their owners.

The breed is recognized by the Chinese Kennel Club

Images: Thumnail from Wikipedia by LauraKelsch – Own work, CC BY-SA 3.0, https://commons.wikimedia.org/w/index.php?curid=17958157.  Other image found on Pinterest and happily credited upon receipt of information