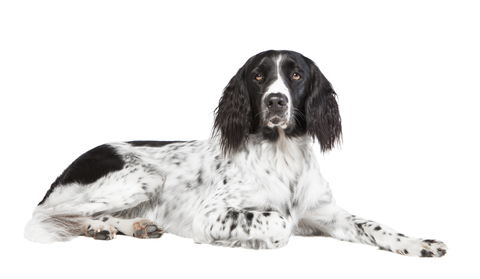 If you know your way around horses, you may know that the spotted color pattern commonly seen in pinto horses is called Tobiano, a pattern produced by a dominant gene that produces white-haired, pink-skinned patches on a base coat color.  In some countries, the name for tobiano and the name for the same pattern in some dog breeds like the Large Munsterlander is the also same: plating.  In other breeds, some call it “ticking,” and others call it “extreme piebald.”

LMs are white with black patches and spots, blue roan or pure black. The head is always black, possibly with a white snip or blaze, and their coats are referred to as either “plated” (patches of solid black hair with the areas between them primarily white), or “ticked” — plates of solid black hair with black specks or black roan between them. That said, we didn’t find reference to the actual word “plating” in either the UKC or FCI breed standard.

Interestingly, the Large Munsterlander was included in a genetic research study and all were homozygous for the sp allele in the MITF gene that causes piebald spotting. It was also included in several other coat color studies and the data summarized on a webpage entitled “Large Munsterlander Coat Color Genetics.” In that paper, the author, Sheila Schmutz, writes, “At birth, all LM pups have white areas and black areas but no ticking or roan. Ticking is the name used for the small black spots that occur in the white areas of the LM. Ticking shows first on the belly at a few weeks of age but gradually shows in all the white areas, if the dog has at least one allele for ticking. If not, then a few small black spots may still develop in the white areas, but not as many. This pattern is called ‘plated.’ At the present time, the gene causing ticking versus plated has not been published.”

As an aside, Small Munsterlanders, which are not smaller versions of the Large Munsterlander, were at one time (the 1920’s) mostly plated in many color variations with the exception of black. About 100 years ago, a popular sire of English Setters also exhibited plating, but evidently breeders bred away from the patterns as they didn’t care for it.