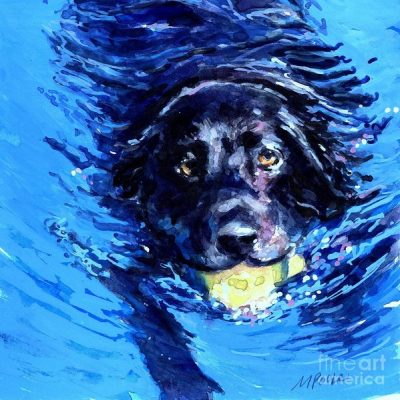 While most people today regard Labrador Retrievers as hunting dogs, the breed actually “cut its teeth” as water dogs working alongside fishermen in Newfoundland, Canada. They retrieved fishing gear, fetched fish that had fallen off fishing hooks, pulled in fish-filled nets, or rounded up fish that escaped out of those nets.

Needless to say, these dogs needed to swim well and efficiently!

Fortunately, they inherited from their relative, the St. John’s Water Dog, a thick tail that was used like a rudder to steer the dog in the water, as well as a thick and waterproof coat that insulated the dog from cold water. The dogs needed it. Water is normally 10-20 degrees colder than the air around it. Coupled with the fact that these dogs worked in an area where the average summer temperature was only 61°F, and winter temps hovered at 32°F, and this was a challenging environment.

The smart alec answer is that the name was already taken, but oh, the irony that two distinct dog breeds was each named after the wrong region (and we won’t complicate things by mentioning the Nova Scotia Duck Tolling Retriever from Nova Scotia, just south of Labrador and Newfoundland!).  In truth, it came down to geography. Labrador and Newfoundland are two distinct territories that appeared under one name at the time. Geographically, the Territory of Labrador is just northwest of Newfoundland and is separated by the Strait of Belle Isle, a lethal, ice-choked channel prone to white-out fog conditions some 78 miles long and between nine and 37 miles wide. Nineteenth century Brits lumped this whole area together as the same land mass, and when the Earl of Malmesbury wrote a letter in 1887 in which he referred to his dogs as “Labrador Dogs,” it was more of a casual, if not sloppy understanding of the easternmost province of Canada than it was a name rooted in precision. He wrote:

“We always call mine Labrador dogs and I have kept the breed as pure as I could from the first I had from Poole’. The real breed may be known by their having a close coat which turns the water off like oil and, above all, a tail like an otter.”

It should be mentioned that one source disagrees with the Malmesbury story and maintains that the name “Labrador” was given to the breed by British breeders seeking to differentiate between the two types of dog, the Newfoundland, and the retriever originally called the “lesser Newfoundland” or the “St. John’s dog.” In fact, some sources say these dogs were known as Labradors long before Malmesbury wrote his letter, but his mention in the note is believed to be the first written record.

But wait, there’s another theory! We came across a source that points out that the Spanish and Portuguese word for workers or laborers is labradores and lavradores, respectively.  There’s also a village in Portugal called “Castro Laboreiro,” where a breed of dog known as the Cao de Castro Laboreiro works as a protector of livestock. It can look very similar to the St. John’s dog, so some believe the Lab’s name may have Portuguese origins.

We leave it to the breed experts to determine, we’re just glad of the existence of all these aforementioned breeds!